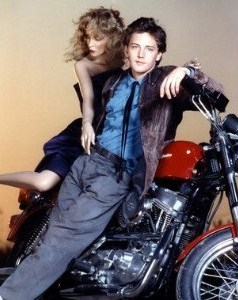 I'm sure you guys are seeing the name in the post title and asking yourselves, "Who the hell is that?"  Well if you looked at the picture and grew up in the 80s, you should be able to figure it out.

Jonathan is the "romantic" lead in one of the funniest romantic comedies from the 80s, Mannequin.  I guess if this was to come out in book form now, it would be classified as paranormal romance or other such nonsense.

Jonathan is a budding artist trapped in one dead end job after another but when he finally finds a job in the stockroom of a department store, his life takes off in a whole new direction.  He quickly meets the lovely Emmy, who is a mannequin that comes to life, but only when it's just the two of them.  Any time someone else comes around she turns into wood again.

Their teamwork quickly cements Jonathan as a fantastic window designer, one that uses artistry and ingenuity in his designs.  The fact that that same teamwork leads to kissing and falling in love is where the hilarity comes into play.  You can only roll around with a come to life mannequin for so long before you get caught up in situations you can't explain.

What I love about Jonathan though is that he doesn't care.  He is unconcerned about what others are thinking of him.  He falls in love and runs with it.  He doesn't over analyze it, doesn't question it because it's not "normal", and he doesn't all the judgements of others to dissuade him from following his heart.  He falls and love and just because it's not what is expected of him, he doesn't turn the other way.  He goes for it and has the happy ending we all wish we could have.

He is someone that I aspired to be like when as a teenager I was dealing with my qualms about being gay.  I quickly realized that I couldn't live me life to make others happy or to accept me.  I had to live my life in such a way that I could accept myself and make me happy.  In that regard Jonathan and I are on the same page.
Posted by Ryan at 10:11 PM

I too love him! I searched a long time to find this movie on VHS - now I suppose I will have to find it on DVD. My kids laugh at me- but I love it!

I loved this movie!

Ryan, I have to say I've never heard of this movie. BUT, now that I have, I'm definitely going to try and find it. ;) Have you ever seen ONE TOUCH OF VENUS starring Robert Walker and Ava Gardner? It's an old 1940's b/w movie about a guy who works in a department store. He falls in love with a statue of Venus who comes to life (Ava Gardner) when he kisses it (If I'm remembering correctly). Your description of MANNEQUIN reminded me instantly of the Venus film. It is delightful as well.

I've tried to come up with my own list of favorite fictional characters and one name stands far above all the others. Sorry but my Atticus Finch beats your Brainy Smurf hands down. Thanks for posting these.

I have to say I never saw Mannequin. I guess I didn't watch many movies in the 80s and just never went back to them.

Fun post - you don't see much praise for Mannequin out there!

Thanks for stopping by my blog!

I loved Mannequin - I saw it in the theater years ago.

Great movie! Cheesy but fun, and your post brought back many memories.

Hey, I made you some buttons for FFC. Hope you don't mind! I'm going to email them to you. Let me know what you think. =O)

LOL! :D I have to say I saw the name and wondered who the character was. I have never been very good on names, that's why I come to you. :) I remember the shows or characters but never the names.

But I do remember this movie! I loved this movie. And like you mentioned you couldn't grow up in the '80s and not have seen this movie. :) Great pick!

whenever you do these posts I'm reminded that we are practically the same age - we definitely grew up watching the same things! this was such a fun movie. :)