The Disappearing Spoon by Sam Kean 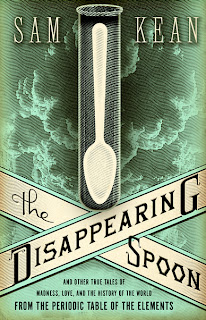 Why did Gandhi hate iodine (I, 53)?  Why did the Japanese kill Godzilla with missiles made of cadmium (Cd, 48)?  How did radium (Ra, 88) nearly ruin Marie Curie's reputation?  And why did tellurium (Te, 52) lead to the most bizarre gold rush in history?

The periodic table is one of our crowning scientific achievements, but it's also a treasure trove of passion, adventure, betrayal, and obsession.  The fascinating tales in The Disappearing Spoon follow carbon, neon, silicon, gold, and every single elements on the table as they play out their parts in human history, finance, mythology, conflict, the arts, medicine, and the lives of the (frequently) mad scientists who discovered them.

Why did a little lithium (Li, 3) help cure poet Robert Lowell of his madness?  And how did gallium (Ga, 31) become the go-to element for laboratory pranksters?  The Disappearing Spoon has the answers, fusing science with the classic lore of invention, investigation, discovery, and alchemy, from the big bang through the end of time.

Why wasn't this book around when I was taking Chem I and Chem II in college?  I floundered in those classes.  If I remember right I only passed one test between both of them, and that was with a 61.  Thankfully I had a rather understanding professor who would call me into his office twice a semester and question me about what I was learning out of the class.  He gave me a C for each class.  Now would this book have helped me with my grades, I doubt it, but it would have made some of the math a little more understandable for me.

Now this isn't a hard science book at all, which you should be able to tell by the synopsis.  This was a fun romp, and more importantly for me a romp that was easy to understand, through the history of the periodic table.  It didn't just cover how and when every element was discovered but the personalities behind those doing the hard work.  I think I learned more about Marie Curie and other famous scientists in this book than I ever did in all the years of school.

The best part of this book though was how it brought the science to life.  It  helped you to understand the significance of each element through the specialness of each one.  It was science book rolled into a celebrity memoir and finished off with a great poly sci case study.  In what other book would I learn why India has such a problem with iodized salt and that aluminum (aluminium) used to be the most precious metal in the world.
Posted by Ryan at 6:14 PM

I loved this book! I was a science nerd once upon a time, and some of the stories were familiar-- but many more weren't. I think they are accessible to anyone with a little interest in science, but have information of interest even to those devoted to the field.

I've seen this one at B&N and been interested in it.

Man I just adore that cover. The content sounds good too!

I think you guys would really like this one. I'm not sure my review really did it justice. I feel that I learned more than I did in two semesters of college.

I hate chemistry and I hate math...enough said? But maybe this book would help me hate them (or at least one of them) a little less! LOL!

Oh, I just saw this in yesterday and was very curious about it; I love truth is stranger than fiction, nonfiction. Great review -I'm definitely putting this on my list.

It sounds like this would be one of those books that would be great to supplement an actual science/chemistry class!

This sounds like the type of non-fiction I enjoy. I'll have to keep an eye out for it.