Dies The Fire by S.M. Stirling 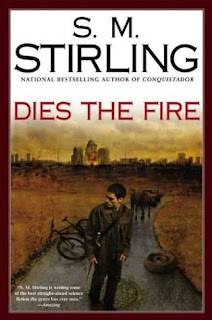 The Change occurred when an electrical storm centered over the island of Nantucket produces a blinding white flash that rendered all electronic devices and firearms inoperable - and plunged the world into a dark age humanity was unprepared to face...

What happens when someone unplugs us.  Electronics, cars, guns, and even steam power no longer works.  Planes plunge out of the sky destroying entire cities in flames and billions of people starve to death when they are no longer able to find food.  Can you imagine what would happen in places like California and the East Coast when nothing works anymore?  Death and destruction reign.

This is the first book in the Emberverse series where the author explores all the ramifications in such a world wide catastrophe.  This first book deals with a short period of time after The Change where a few survivors in Oregon are finding new ways to live.

Mike Havel was an private charter pilot who just happened to be flying a plane full passengers over Idaho when the change happened.  What follows for them was a harrowing plane crash and a cross country journey back to Oregon.  The are forced to deal with bandits and cannibals and end up forming a military styled group nicknamed The Bearkillers, after Mike kills a bear without a gun.  Mike eventually becomes Lord Bear as he leads his ever growing group of survivors to safety.

Juniper Mackenzie, a musician and Wiccan priestess, is playing in pub full of college students when the lights go out and planes start dropping from the sky.  Her and hers quickly leave town and head out to her families cabin where they hope to wait out the worst of what's to come.  As more or her friends arrive and her community starts to grow, Clan Mackenzie, a pseudo Scottish clan with Wiccan religious beliefs starts to organize their section of the Willamette Valley.

In Portland a history professor and his wife, Norman and Sandra Arminger, quickly seize control with the help of gang bangers and remnants of those who liked to play act with swords and accents before the change.  They form the Portland Protective Association and organize themselves into a feudal society.  They rule with the sword and have no problem killing those that stand in their way.

These are they three main power players who are trying to reform their small corner of Oregon into a livable environment.  They relearn how to plant crops and raise livestock.  They discover how to forge swords, armour, and even how to make bows.  The land reverts back to a more violent time where wars were waged for territory and resources.  A land where heroes and despots are made and legends are born.

I have to say I love this book.  Watching society try to reform after billions are dead and nothing works the way we always knew they would is fascinating.  Mike, Juniper, and the large cast of friends, family, and allies are some of the most realistic characters I've had the pleasure of reading in a very long time.

I first read this book a few years ago and every once in a while I have to dust it off and explore their world again.  I would hope I would have the strength of mind to survive in such a world turned upside down.  I would hope to wind up in a group like the Mackenzies or the Bearkillers and not in a world ruled by Norman Arminger.  I've already read the next three books in the series (reviews later) and I have 3 more to go.  I can't wait to see how everything turns out.
Posted by Ryan at 11:49 PM

I have never heard of this series, but being and Oregonian and a lover of these kind of books, I must check this one out. Thanks for the great review!

Sounds interesting for sure. I would hope that I could make it too but I often wonder if I could. My son loves this type of book.

New book for me - great review! I'll defiantly have to check it out.

This sounds like an intense book. While on the one hand it intrigues me on the other hand I'm weary of books that are really dark and hopeless feeling. They always get me so down. I'll have to look into this one. I don't remember seeing any other reviews of it before.

I tried a S.M. Stirling book several months ago and just couldn't get into it - but I think it may have been because it was based on the same world built in another series.

For someone looking to get started with Stirling's work, where do you recommend I start?

This sounds frightening and yet fascinating. Reading your description, I found myself thinking how I would survive if such a situation were ever to occur. I love books that make me think like this. Thanks for bringing this to my attention! I now have to go add it to my wish list!

This is not the type of book I usually read, but I found your descriptions of the three groups fascinating, especially Clan Mackenzie. It will be interesting to see how everything works out.

Sounds like an interesting read. I usually try to stay away from books like this as it just upsets me and gets me over thinking. But this one sounds like it not as devestating. Thanks for the review. :)

This book sounds interesting, and one that I think I may enjoy.

My mind always wonders about life when we were not reliant on electronics. Even more so, I wonder about life back in the 1700-1800s. It seems that these people are having to resort back to how people lived back then.

Anyway, I am intrigued. How many books are in the series? That answer may depend on if I will allow myself to get snared in. :) Are they lengthy?

I have every books of the "Emberverse" universe and I like the all!