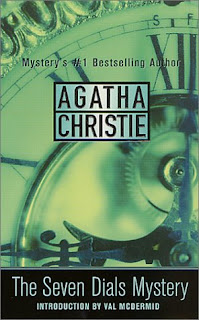 Reclusive tycoon Sir Oswald Coote and his melancholy wife, Lady Coote, have hit upon the ideal plan to spice up their quiet lives.  They'll host a lavish weekend part at Chimneys, their isolated estate, and invite only "bright young things."  But the festive mood is clouded by doom.  A practical joke involving seven clocks and a sleeping guest has ended in accidental death-and cuase for alarm.  For the guests may not be all that they appear.  And as whispers of a strange clube called Seven Dials echo through the halls of Chimneys, all hands will be pointing to murder....

First of all I have to say I loved this book and I'm going to have to put it up near the top of my favorite Christie books.  This book brought back a fun loving character from a previous books, "Bundle" Brent who first appeared in The Secret of Chimneys, she shines in this one.  Like most of Dame Agatha's female characters, Bundle is a strong minded woman who not only solves the case but finds love all at the same time.

I really can't get into too much of the overall storyline as it would give too much away but I will say while there are a few murders, this book reads more like a spy vs. spy read though you aren't sure which incidents are really red herrings that are leading the reader down a path that really doesn't exist.  I have to say I was surprised by the ending and I wouldn't have had it any other way.  This was a affirmation for me of how good Agatha Christie really was at mapping out plot line that has twists, turns, and false paths that all make sense at the end.

Drats, I haven't read this one yet. Can't wait to get my hands on it now.

Its a good one isn't it? I remmeber really enjoying it. there is also a TV adaptation I think, although I preferred the book.

thanks indeed for sharing

I think Agatha Christie is who made me love mysteries.

Loved your thoughts on this one Ryan...I picked up quite a few Christie books from my library sale...hopefully this is in my pile at home!!

Hey Ryan, You are working hard to get me to read another one of these books. This sounds like a great read. Thank you for the great review! :)

Ryan - first of all, every time I stop by your blog looks more gorgeous than it did the time before. I feel like I'm in a tropical rainforest - love it!

I also really like this book. It has such a vintage feel to it. I love your "spy vs. spy" reference, because that's very true. It has a touch of comedy even though the theme is quite dark.

I wonder if that was intentional, or if it's a reflection of Christie's distance from the realities of life in that war fraught era. I think she was fairly isolated by her wealth, even though I doubt she ever considered herself particularly wealthy or upper class.