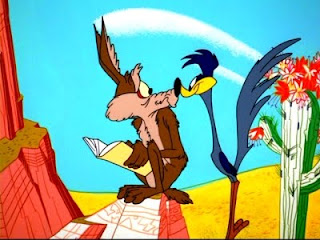 While searching for a appropriate youtube video to put at the end of this post, my roommate commented that he couldn't understand why someone our age would still love these characters.  He said when he catches it on TV now, he just gets annoyed by them.  I told him to mind his own business and buzz off.

How can you not love the classic give and take between these two?  The pursuit, followed by the ultimate humiliation and defeat every time is a classic story. Whether you want to compare it to the relationship between two people who's feelings for each other aren't quite matching up or to the pursuit of your goals that seem to be just out of reach, the story seems to resonate within each of us.  Now what I just described is what I would compare this story to now, as a kid I just enjoyed it for the fun.

Watching this show as a kid was a war of wills for me.  At times I would be rooting for Wile E. Coyote to accomplish his goal of capturing the Road Runner.  I would want his crazy hair brained schemes to work.  I would want the boulder to wipe the Road Runner off the road, I would wait in anticipation to see if his new ACME rocket would help him out in his quest or if it would fail horribly once again.

At other times I would want the Road Runner to get away from the hungry look in Coyote's eyes.  I would sit on the floor with bated breath to see how he would get out of the Coyote's new nefarious trap.  This was the safe side to root for, because no matter what, you knew the Coyote would fail once again and that the Road Runner would live to see another day.

I loved Wile E. Coyote. I think he may have had a chance if he had used a different company's merchandise. Acme obviously had poor quality products.

I would root for Wile E Coyote sometimes too! I can still hear that song in my head.

I love Looney Tunes...wish the kids would watch more of this now instead of what they do watch!!

This is an oddly depressing cartoon for me. Dunno. :) Probably because of, as you pointed out, all the allegories in it.

I've got an award for you on my blog, make sure you claim it!

Do you think Roadrunner symbolizes the government? :P

I loved these two! Oh, I just got an idea for next week now. :) I was thinking of this duo just a few days ago when my son was watching some of the garbage cartoons they have on now. I use to laugh at Coyote always falling for the same things; tunnel not really there, falling off the cliff... all his traps worked for Road Runner, but never for him. I started to think after a while Road Runner was magic. GREAT PICK!! Tell your roommate he doesn't know a good cartoon when he sees one. LOL ;)

i was so tickled when i saw a real live road runner running across the road while living in san clement, ca. they are fast.

Another great choice! I always felt a little sorry for Wile E, but he never gave up hope that one day he would win!

Always hoped that they would let him catch the roadrunner just once, and then be so shocked that he let him go.

I'm tired of the Roadrunner always winning against Wile E. If I'm that coyote, I'd kill that bird without any regrets.