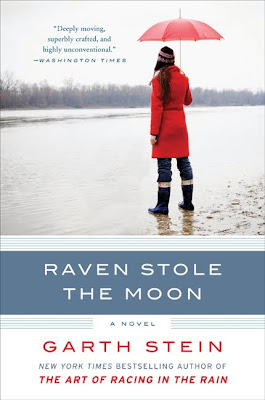 When Jenna Rosen abandons her comfortable Seattle life to visit Wrangell, Alaska, it's a wrenching return to her past.  The hometown of her Native American grandmother, Wrangell is located near the Thunder Bay Resort, where Jenna's young son, Bobby, disappeared two years before.  His body was never recovered, and Jenna is determined to lay to rest the aching mystery of his death.  But whispers of ancient legends begin to suggest a frightening new possibility about Bobby's fate, and Jenna must sift through the beliefs of her ancestors, the Tlingit, who still tell of powerful, menacing forces at work in the Alaskan wilderness.  Armed with nothing but a mother's protective instincts, Jenna's quest for the truth behind her son's disappearance is about to pull her into a terrifying and life-changing abyss.

I have to admit upfront that I had never heard about this book or the author before, which after reading it I should be apologizing for, so when I was offered a chance to read the reissue of the book and I read the synopsis, I jumped at the chance.  Now I will also have to admit to feeling a little disappointment when I first got the book and glimpsed the cover.  It looked like any other book out there and had a hint of "chick lit" to it.  If I had seen the book in a store, sitting on a new release table, I would not have picked it up.  I actually looked up the earlier cover for the book, and while it wasn't the best either, I felt that it caputred the mysterious aspect of the book better.  While this cover seems to say not much other than that it's pretty.

Now that I got that off my chest, I have to say I loved this book.  The story was a blend of drama, mystery, paranormal, myth, and fantasy all rolled up into a very cohesive book that even when it took the fantastical turns, you always feel as if it's real.  Jenna and Robert (her husband) felt like real people trying to deal with their loss in different ways which caused strain in the relationship.  It just so happens that on the anniversary of their son's death they are required to go to a dinner party which ends up being too much for Jenna.  She ends up taking off and ends up back in Alaska where the tragedy happened.

Jenna meets three individuals who are to become very important in her life, Oscar the loveable dog who may be more than he seems, Eddie the adorable fisherman, and David the tribal shaman who is dealing with demons of his own.  With their help Jenna takes a terrifying and touching journey to discover what happened to her son and where he is at now.

I've been struggling to do this review simply because so much of this book is important to the story and I don't want to give too much away.  The last thing I will say is that I felt this book was the perfect blend of the fantastic and realism, that the way these two elements are blended is seamless and you aren't always sure where one ends and the other begins.

I would like to thank Sarah at Terra Communications for the opportunity to read this wonderfully written book.
Posted by Ryan at 11:50 PM

Funny, I have a book, Breaking the Bank, with the same woman/umbrella on it. Guess they picked out some stock photo?

I've been trying to decide whether to read this one or not. Now I'm leaning towards yes. :)

I'm with you on the cover. It does look a bit like a "chick lit" book.

You are so right about this cover. Someone is giving it away and I passed it up because I thought it looked like just another chick lit book! Darn...I'm going to have to find that giveaway again. This sounds like a really good one.

It's me again! I just noticed you changed your background...very nice! You found it at Elegia's, I see. She has some really nice ones, doesn't she?!

I'd like to see the earlier cover of this book. It sounds fantabulous - the perfect blen of fantastic and realism. I will definitely be looking for a copy of this!
Also, like Michelle, I noticed your new background, and I wanted to say I find it lovely!

Thanks for mentioning me, Ryan. It was a pleasure to share this book with you, and I'm glad you enjoyed it as much as I did. I'm happy to know you're enlightening people... don't judge a book by its cover, right? :)

I think this is a wonderful review and I'm excited to enter your giveaway now!!! :)

The cover wouldn't have excited me either, but your review was great.

Greta review Ryan - that cover love can really mess with you can't it? I have done the same thing and probably missed out on some great reads.... and I know I have picked up some bad ones because the cover appealed to me.

LOL - glad to hear you liked it despite the possible chick-lit ambiance. love the alaska setting and folklore elements in this one.

This book sounds like you did really enjoy it. I hate to admit, but with seeing the cover I would probably not get it either. Sorry. Glad you enjoyed the book!

I feel the same way about newly released, popular, and bestseller books. My instinct is to keep away from them. I do read chick-lit but I don't have a huge quota for this category. Your review is the second I have read today---the Native Indian background would be a positive sign for me to pick it up. :)

I had the same problem when it came time to review it Ryan. The story is actually very complex and telling too much would certainly give away important events and I never want to spoil a future read for anyone. I loved your review and am so glad that I read this one too!

This books looks SO GOOD! You've written an excellent review, Ryan. I need to pick this one up.