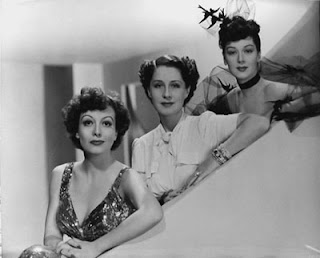 I was watching one of my favorite movies, the 1939 version of The Women, and it reminded me that I havent' mentioned the great characters in a FFC post yet.  So here I am today, rectifying that wrong.

For those of you not familiar with the movie, here is a link to IMDB site that gives the full cast list and synopsis.  The movie is a brilliant remake of a Broadway play that took a intimate look at the cat fights and interpersonal politics in a group of society women.  The cast was all female and all the male characters were off screen and never heard from.

I want to quickly talk about the three main characters and the fabulous actresses who played them.  Norma Shearer (in the middle of the picture) played Mrs. Stephen Haines or Mary for short.  She was the wronged woman who's husband was having an affair behind her back.  She was also the last to know about, her friends, gossiping behind her back, took great relish in knowing something that Mary never did.  As played by Norma Shearer, Mary was demure but strong at the same time.  She demanded the respect that every woman should get from her husband and when things didn't quite go her way, she left him.  She wanted to be the modern, independent woman, who was the equal of her husband.  She also wanted to be needed and loved by him and if he would have played it differently she never would have left.  By the end of the movie, you can see the pain Mary is still feeling, two years after her divorce.  You can tell she still loves her ex husband and you get to see Mary, playing by the rules of her friends, to get him back.

Joan Crawford played Crystal Allen, the gold digging saleswoman who gets her claws into Stephen Haines.  She is the perfect vamp, played to the nth degree by the wonderful Joan Crawford.  You want to despise the woman for destroying what was a happy marriage, but by the end of the movie you realize that as catty and selfish as Crystal is, she still comes across as a understandable character.  That you can understand her motivations and wish her the best.

Now comes my favorite character, that of Mrs. Howard Fowler, we can call her Sylvia.  She is played by the hysterically funny Rosalind Russell, who is still my favorite actress of all time.  She is the bitchy, gossipy cousin of Mary who stays right in the thick of things the entire time.  She enjoys seeing other women's marriages fall apart because it means she doesn't have to think of her own that is slowly dying because her husband is falling for a chorus girl (Paulette Goddard).  She is both conniving and funny at the same time.  You love it when she joins Mary in Nevada to get her own divorce, because you think she deserves it.  You love it even more when she turns on Crystal at the end and rejoins the side of a very dubious Mary.  You know she has no morals but you love her anyway.

There are some other fantastic performances in this movie by Ruth Hussey, Lucille Watson, Phyliss Povah, Joan Fontaine, Marjorie Main, and Mary Boland.  Hedda Hopper even appears as herself.  You put all these women together and you get a wonderfully entertaining group of characters that never fails to make me laugh.

I enjoyed your trip in time here...I haven't seen this movie but the next time it's ever on..I'm there!!!

What a cast of characters :)

This sounds fabulous! Wasn't this the movie that also was remade recently with Meg Ryan?

Just thinking about The Women makes me want to go out and get a manicure - JUNGLE RED! Lol :)

I think my years of my nose in a book has caused me to miss out on many things. I hate to admit this but up until your post I had no idea that The Women was a remake.

True. I loved the new version of it and have watched it many times. Now I need to dig my head out of a book and see if I can find this original.

WOW! What a pick for this week! These are a pick to have out there.

I just have to appoligize that I have not been doing this lately. I am starting to run out of characters, at least characters that come to my mind. I have to work hard to come up with characters.

You know I love this movie too! It is the epitome of the 1930s movie-making. I so love Joan Crawford and Joan Fontaine. And didn't Norma Shearer play Cathy in the Olivier version of Wuthering Heights? I think she did. This is such a great movie. The remake was just...meh...compared to this masterpiece.

Great post this week! I'm not doing one this week because it's been just a crazy week and I had a test last night. I may have to skip next week too...my sister is going to be in town...YAY!

I loved Little Women! When I was young I used to enjoying acting out that scene where Beth enters the room and immediately passes out. Though I've never heard of The Women, but it sounds like a movie I would love so I will have to watch it soon.

I like this movie. The end was comical (the closet/party scene). And I definitely have no desire to see the remake.

I absolutely adore this movie - - one of my absolute favorites. The so-called remake cannot even begin to touch the classic original.

Thanks for posting about it and spreading the love.