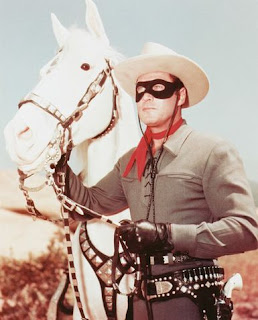 I'm not sure if anyone who grew up watching TV as a kid, well at least my age or older, who hasn't seen at least one episode of The Lone Ranger.  Now I wasn't around when this show first aired on TV between 1949-1957, but like a lot of shows I grew up watching, I was able to enjoy it in syndication.

There was nothing about it that a young kid wouldn't be able to love.  There was plenty of action, lots of gun fights, and a really cool horse that I always wanted to jump right on and take off into the sunset.  Of course it helped that Reid (The Lone Ranger) and his partner, the equally cool, Tonto were always on the side of truth and justice and they always came out on top.

Now I'm sure there are some now who would want to look at this show with glasses tinted by various sociological lenses, but for me this show was just fun.  It was the basic storyline of right vs. wrong and good will always win over evil.

I've seen a few of the movies and while I enjoyed them, the Lone Ranger in my head will always be from the TV show that first aired from 1949-1957.  I've even listened to a few of the old radio show broadcasts and I loved them.  Sitting at home on a rainy day listening to show my grandparents and great grandparents would have listened to always puts me at ease, besides they are a whole lot of fun.  Now one of the days I have promised myself that I will check out a few of the novelizations and comic books based on this character.

Just watching the opening sequence of the show puts me back to Saturday mornings in 1st grade, wearing my pjs, and scarfing breakfast down in front of the TV watching The Lone Ranger and Tonto fight the good fight.

I grew up watching the original airing of this show (yes I am an old fart), but my sociologist glasses were recently fitted through the lens of the American Indians in Children's Literature blog, and I am afraid I can't take them off. I just finished a book by Sherman Alexie, The Absolutely True Diary of a Part-Time Indian and will be reading another by him call The Lone Ranger and Tonto Fistfight in Heaven.
I highly recommend this author, and while the Lone Ranger was entertaining when we were kids, I have to say that it is not the kind of entertainment I would want to provide kids today.

I even listened to The Lone Ranger on the radio! That's how far back I go! LOL.

I am always surprised when I find out that the shows that I watched when I was very young were not first-run, but were actually made before I was born. Being born in 1957, I guess this was another one. When I was a kid, I just assumed that they were all new. Of course, when I got a little older, I could tell the difference, especially with the advent of color TV, but way back then, they were all b&w.

I have never seen an episode of this show, ever? How could I have missed it?

Haha Never seen it before. Sounds like you have fond memories of this character which is always wonderful :) Great post, Ryan.

This was one I remember being on TV, but I never watched. Guess I wasn't a big cowbow & Indian fan as a kid. Think The Brady Bunch was more my type of show! *L*

This is a great pick!!

I never really got into watching the Lone Ranger. But he was a great character.

Sorry I didn't do the meme this week. We are doing a lot of running this week and I am just behind in everything. Hope you are having a great week!