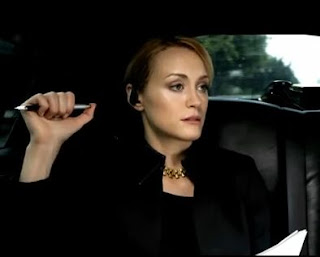 So for this week I picked Dagny Taggart, the protagonist of Ayn Rand's Atlas Shrugged.  Dagny is the the Operating Vice President of Operations for Taggart Transcontinental which is being run into the ground by her weak willed brother James Taggart.  She is strong willed and independent and does everything she can to save the company from going under in a country that is slowly being taken over by those who want to reward laziness and punish inovation.

You would think that in book filled with archtypes and characters that were well written to be examples of what the author either admired or disdained, that Dagny would be a little one sided and not as dynamic as she is portrayed.  The author did a brilliant job showing a woman who is both principled and flawed, a woman who strives to save everything she loves and starts an affair with a married man all at the same time.  She is a woman who respects herself and knows what she has to offer to her company and other people in her life that she respects and admires.  She is a woman who will not compromise her beliefs even when society seems to be falling apart around her.

Regardless of what an individual reader feels about the book or Ayn Rand herself, I would just say that this character is brilliantly done and one of the strongest women I've ever had the honor of reading about.

Although I own this book, I have not read it yet. I plan to read it...someday. =O)

It does seem like this character makes for an interesting female protagonist. Great pick this week!

I have no idea who I'm going to do this week!

This is no personal attack on you, but Ayn.Rand.Makes.Me.Sick.

Now why hasn't it been made into a movie yet? Do you think, once they do, that Dagny will remain as strong a character as in the book?

I have to agree with you!I almost named my daughter Dagny. Atlas Shrugged is my favorite book..ever. I have read it every 2 years since I was 14. Sick, huh?

I never liked Dagny or Ayn Rand, though I agree that Dagny is a strong character, in many ways, and Rand is an influential and thought-provoking writer.

Michelle, I really enjoy her as a character.

Dannie, I know some people feel that way about her, but that shouldn't stop someone from enjoying a well written character.

Stephanie, I don't know yet, I think it would make an interesting movie and since they have already made The Fountainhead into a movie, I say they should go for it. I think Angeline Jolie or the lady who plays Kate in Lost would be good in the role. She is the focal point of the story and her strength is what makes her, so I think they would have to.

joemomma, I haven't read the book in years but for a while it was one of my favorites. I still enjoy it even if I don't completly agree with the philosophy behind it.

Stephanie, May I ask why you don't like the character?

I haven't read this book for many years—loved The Fountainhead, too—but I do recall how this character was so multi-dimensional, which is my favorite kind.

Laurel, I agree with you, a well rounded charcater is always a joy to read.

I guess every person in America knows about this book, but I've never heard anyone in Europe talk about it. :)

Interesting pick this week! I hate when I pick a book character and don't have a picture to go with it. I just feel like something is missing. But, usually with doing books there are no pictures of the characters.

I got side tracked this week and didn't get my character up. I will have to do it next week.

Hope the week is going well for you. :)

I only read one Ayn Rand years ago - I think it might have been The Fountainhead. Sounds like a fascinating character, whether or not you agree with Rand's philosophy.