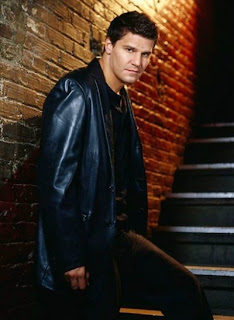 Well here we are, a new week and a new FFC post.  Well as you can tell I picked Angel from Buffy: The Vampire Slayer and Angel, one of the sexiest vampires to grace the small screen.   How can you not love him, look at him, he's hot.  Of course it helps that he was played by David Boreanz, who is one of the hottest guys in hollywood.

For those of you who were living under large, unmovable rocks from 1997 through 2004, Angel was the cursed, brooding vampire that broke Buffy's heart.  He was turned into a vampire by Drusilla (played by the wonderful Julie Benz) and the two of them went on a rampage, slaughtering hundreds of people and reveling in the blood.  He killed a young gypsy girl, then had her clan curse him with his soul back.  He spent years living in squalor, feeding of rats, and moping around the world, feeling sorry for himself.

He is given a purpose to protect Buffy and the rest is history.  He was a brilliantly complex character who grew over seven years into a man who loved his friends, his family, and even under the worst circumstances always tried to do the right thing.  You see him as the hero and the villian at times and both of those aspects of his personality are needed to make him the man that he is.
Posted by Ryan at 1:00 AM

I loved Angel. Someday I might even finish the series.

Ohhh, I love Angel (even if I, unlike you, really don't think he's that hot). I'm actually in the process of rewatching Buffy right now! :-)

Definitely a devoted fan of Angel and for that matter the whole Buffy and Angles series. Still watch reruns from time to time.

I loved Angel and how he was so torn inside!!! He still managed to keep a part of his humanity!! That's what made this show so great!

Hot -yes! Anyone watch him in Bones?

I heard a joke the other day you might find funny that kinda goes with this here post-- Buffy killed Edward. The end.

Twilight fans might be unhappy about that, eh? lol :D

I absolutely love Angel! Thanks for posting!

My only exposure to Buffy was when I was still working as a social worker, and in my last job at a private agency (that encouraged any kind of quality time with clients), I would sometimes sit through an episode of Buffy with teens I was supervising...one can really gain rapport in the most unlikely settings!

I feel like I missed so much by never watching Buffy. Who knew it was going to become a cultural reference point? Yes, I lived under a rock and still probably do.

I have to admit that I have never seen a single episode of Buffy or Angle. It wasn't until Blood Ties that I got interested in any of this vampire stuff. And while he is pretty hot, I still say that Henry Fitzroy was hotter :)

So do we like the Good Angel or the Evil Angel? Personally, I preferred him as evil. ;)

Oh Angel...how I love thee! Angel is probably my favorite vampire, after Lestat. He is so gorgeous! Truthfully, I loved him more when he was good...couldn't help it. Guess I'm a sucker (no pun intended) for a nice guy! I still love David Boreanaz (sp?) and I'm so glad he is on Bones now (one of my fave shows).

I love your new map header...looks great with your new background!

I always loved watching Buffy! Angel was always one of the best vampires I have ever seen. He fit the part so well and played the part even better. I even watched when he went on to his own show.

Excellent choice! Loved Angel, both the good and the evil versions. And while he was a hot vampire, my heart belongs to Spike. :D

Angel was the first Vampyre I ever fell in love with. I was a senior in high school and although I had watched some vampire movies before, most notability, The Lost Boys, Angel is the one that lured me into the dark world of vampires.

I have never returned.

I liked him on Angel but better on Bones!

I lived under a rock for a long time, and only started watching Buffy & Angel in the last couple of years of their respective series. I have so much to catch up on that I get discouraged from actually doing it.

But yes, Angel really was a great vampire! He was similar in tortured history to Louise from Anne Rice's books (I hated Lestat; Louis was the one with real character), but with that great Whedonesque dash of humour on top of it.

Really one of the great characters, period, not just among vampires.

I love the Buffy the Vampire Slayer and Angel series'. Angel is a character with great depth and personality.

I LOVED Angel!! I loved him in Buffy & Angel (I also like david in Bones). Buffy is one of my most fav shows ever! Great pick! :)

He really *is* hot. I've never seen a single episode of either Buffy or Angel, simply because it looked kinda trashy and not really good at all (kind of like Charmed). Would you say I should see them at some point? Which one? :)