Dawn Of The Dreadfuls by Steve Hockensmith 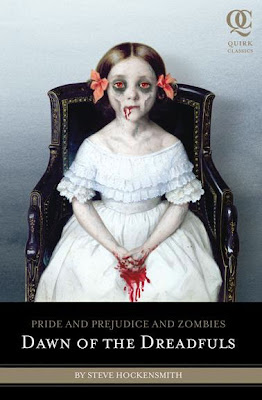 ....Dawn of the Dreadfuls-a thrilling prequel set four years before the horrific events of Pride and Prejudice and Zombies.  As our story opens, the Bennet sisters are enjoying a peaceful life in the English countryside.  they idle away the day reading, gardening, and daydreaming about future husbands-until a funeral at the local parish goes strangely and horribly awry.

Suddenly corpses are springing form the soft earth-and only one family can stop them.  As the bodies pile up, we watch Elizabeth Bennet evolve from a naive young teenager into a savage slayer of the undead.  Along the way, two men vie for her affections: Master Hawksworth is the powerful warrior who trains her to kill, while thoughful Dr. Keckilpenny seeks to conquer the walking dead using science instead of strength.  Will either man win the pirze of Elizabeth's heart:  Or will their hearts be feasted upon by the hoardes of zombies?

When I first heard about Pride and Prejudice and Zombies I was listening to Wait, Wait Don't Tell Me on NPR and while they were making fun of it quite a bit I found myself getting a little giddy in the car.  So when that first book finally came out a few months later I was lining up in the store to get my hands on it.  For the most part the book lived up to what I wanted it to be.  It took a book, Pride and Prejudice, that for what ever reason I found myself falling asleep every time I read it and made it come alive for me.  The book that once bored me to tears gave me goose bumps.  Now I wasn't totally in love with it because it still held the language that I can't get through and not enough zombie action (blame it on the fact I'm a guy).

Fastforward in time to a few weeks ago when I saw someone posting about Pride and Prejudice and Zombies: Dawn of the Dreadfuls coming out and that same feeling of euphoria overtook me once again. I was so excited to see that it would be a prequel to PPZ and since Jane Austen never wrote such a book, it would be all new. I was bouncing up and down in my chair so hard I think I almost broke the poor thing and I had to get on twitter right away so express my glee. Little did I know that my tweet would be spotted by the wonderfully kind Melissa Monachello from the publisher, Quirk Books, who would then offer me a copy of the book. When I got that tweet, I almost fell on the ground. For the next few days I waited for the book to arrive and once I did it took all the self control I had to set it aside so I could finish the books I had already started.

Now I have finally finished the book and I must point out that this prequel was everything I wanted to PPZ to be. It had more brain eating, limb dismemberment, and gut spillage than the first plus a host of new characters to get to know. The book starts off with one of dryest tongue-in-cheek opening lines I've read in a long time:


"Walking out in the middle of a funeral would be, of course, bad form.  So attempting to walk out on one's own was beyond the pale."

That line promised good things to come.  The book is full of witty dialogue and a wry sense of humor that I find refreshing.  Most books that feature zombies or other such nasties tend to be in the strict horror genre or in the "urban paranormal", "urban fantasy", "paranormal fantasy" or what ever else you want to call it.  Now there is nothing wrong with that last genre, I just find it tends to "sex" up such creatures, which can get rather tedious after a while.  This book, at least for me, played the horror card well but never took itself to seriously.  The bordering on sarcastic sense of humor is what made this book great for me.  It was used to point out the flaws that existed in society at the time as well as looking at male/female relationships and their respective roles in a world gone crazy.

Now I know some of you, the Jane Austen purists to name a few, will probably not even give this book a chance, either because it plays around in the universe created by a beloved author or for the simple fact pleny of innards are spilled and devoured.  I would only ask that before you reject it out of hand, you give it a thought or two to see if you could maybe find yourself laughing aloud, while being horrified at the same time.
Posted by Ryan at 5:38 PM

I want to raise my hand as one of those Jane Austen purists. I really want to try PPZ but I'm worried I won't like it and brain eating. Eew!

Although Ryan your review is inspiring me to maybe give it a go! Maybe!

Okay although I am leary of mashups in literature I keep hearing great things about Dawn of the Dreadfuls. I wonder I should read PP&Z first though.

I used the same quote a few weeks back for a Teaser Tuesday :-) Have you seen the trailer yet? I posted it on my blog last week and I have to say, it was very well done: creepy and funny at the same time.

As for the original, it does take a bit to get through it but if you want to cheat, check out the Colin Firth as Mr Darcy, BBC version. Even within the first hour...of the 4, lol...you'll see in the characters of Mr and Mrs Bennett an added dimension to the Dreadfuls book (the sarcasms and societal guffaws, etc.)

I'm glad you liked this one too.

I ALMOST bought PPZ from my used bookstore today and am now regretting NOT buying it! Once again, great review!

I just don't think I can stomach any more zombies.

If it's a prequel to PP&Z, who are the main characters?

same here. i was expecting more z-action in ppz. and loved how dawn of the dreadfuls went all out and even used the zed word!

I bought this one a couple weeks ago. I'm dying to read it but having a hard time fitting in between review books. Thanks for a great review!

Does anyone know the name of the artist who drew the little zombie girl cover for this book? I love the image