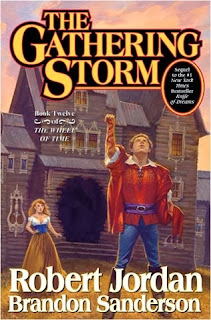 Tarmon Gai'don, the Last Battle, looms.  And mankind is not ready.

Rand al'Thor, the Dragon Reborn, struggles to unite a fractured network of kindoms and alliances in preparation for the Last Battle.  As he attempts to halt the Seanchan encroachment northward - wishing he could form at least a temporary truce with the invaders - his allies watch in terror the shadow that seems to be growing within the heart of the Dragon Reborn himself.

Egwene al'Vere, the Amyrlin Seat of the rebel Aes Sedai, is a captive of the White Tower and subject to the whims of their tyrannical leader.  As days tick toward the Seanchan attack she knows is imminent, Egwene works to hold together the disparate factions of Aes Sedai while providing leadership int he face of increasing uncertainty and despair.  Her fight will prove the mettle of the Aes Sedai, and her conflict will decide the future of the White Tower - and possibly the world itself.

The Wheel of Time turns, and Ages come and pass.  What was, what will be, and what is, may yet fall under the Shadow.

So here starts what Robert Jordan intended to be one book, and with Brandon Sanderson at the helm, it turned into three.  For those of you who don't know, Robert Jordan died before he was able to finish his epic series, and it hung in limbo for a while.  Eventually a decision was made, with a lot of input by Jordan's widow, to ask Brandon Sanderson to finish the series.  One Sanderson took a look at the notes, the decision was made to break it into three books, instead of just one.  After finally finished the series, I think it was the right decision, though I will always wonder what would have been different, had Jordan lived to finish on his own.

I like Sanderson's take on the characters and the way he seems to be a bit more willing to wrap story lines up and allow characters to have a finality to their story line.  The Gathering Storm mainly centers around Rand al'Thor and Egwene al'Vere.  Rand is trying to fight off the madness and paranoia that channeling saidin, when it was still tainted.  It's driving him into madness, forcing those around him to fear for themselves and the world.  He does manage to kill two of the Forsaken, both of them women, which he has always been reluctant to do.  Semirhage did bring it on herself.  She used a domination band to force Rand to torture and almost kill Min.  He frees himself, kills her, and turns on Cadsuanne, banishing her from his presence.

Needless to say, he isn't really that sane right now, he tries to force Tuon (god, I hate her) into forming an alliance with him.  It doesn't go well, she turns him down, which infuriates him even more.  For her part, she decides to attack the White Tower, thinking they were supporting him, but more on that later.

In a rage, he tracks down the Forsaken Graendal.  He tracks her down, and destroys the palace she is in with balefire.  Luckily for her, she realizes what's about to happen and allows Aran'gar to die in her place.  You almost feel sorry for Aran'gar though.  She was Balthamel, one of the thirteen Forsaken, and one of the first to awaken.  He was killed while our heroes were on the search for The Eye of the World.  He was resurrected as the gorgeous Aran'gar.  Aran'gar was just as dangerous, and used his/her new female body to the fullest advantage.  It would really suck to die twice, at the hands of the same man.

Rand's use of balefire upsets Min and Nynaeve, who turn to Cadsuane for help.  Cadsuane sets events into motion that brings Rand to the brink of kill his father, Tam.  When Rand realizes what he is about to do, he disappears and when he is seen again, he is calmer and at peace again.  But he is more determined and ever to bring things to ahead.

Meanwhile, Egwene is still being held prisoner in the White Tower, but her behavior is winning over support. Her subtle manipulation of those around her, is slowly forcing them to think of her as the real Amyrlin Seat.  I'm starting to really like Egwene again, and I almost respect her more than most of the other characters.  Her strength and characters in the face of adversity, is amazing.  The way she reacts to finding a dying Verin in her room is rather interesting.  I would have expected that Egwene, at finding Verin is of the Black Ajah, would have been infuriated beyond belief, but she didn't react that way.  She allowed Verin to confess everything and was able to forgive her as she died.  On a personal note, Verin broke my heart here.  I loved her character and while I understand the need for this, I was devastated by her death.

When the Tower is attacked by the Seanchan, it's Egwene who rallies the troops and beats back the invasion.  And after Eladia is carried off by the Seanchan, and thank the lord for that, it's a rescued Egwene the Tower turns to make itself whole again.

Both characters go through a wide array of changes, and their characters develop in ways I'm not sure I ever saw coming when I read the first book.  They almost have nothing in common with the Two Rivers youth they were introduced as, and they are probably two of the most fleshed out characters in fantasy.  I also think it's fitting that their stories end in similar ways, though not til the last book.

Boo Seanchan, I will always hate them

Still haven't read any of these....need to remedy that one day.

I still need to start this series. *sigh* I know you've had your ups and downs with the characters ;) but so sounds good.