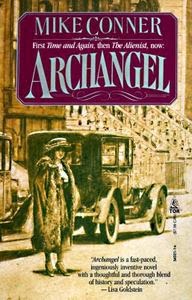 Archangel is set in an alternate universe Minneapolis, in the late 1920s, after a decade of devastating plague.  Hun, a blood disease that appeared during World War I, ended the war and is killing more people every year.  Like other great cities, Minneapolis is a shadow of it's former self, isolated by the breakdown of civilization.  Whites are dying while blacks are immune and trying to forge a new social compact in a radically changed society.  And a mysterious woman calling herself "the Archangel" broadcasting the music of the jazz age - and the real, uncensored news - from a pirate radio station.

Danny Constantine, a young newspaperman, discovers a weird series of murders that looks like the work of a vampire.  But in a world of bad news, even his own paper doesn't care to print his discovery.  Danny has been alone in the world since his wife dies of Hun, and his investigation becomes his personal crusade, involving him with an embittered black police officer, a doctor seeking a cure for the disease, and the social forces contending for power in the crumbling city - and finally, with the Archangel.

I'm not sure if most of you know that I'm originally from Minnesota or not, but it's a huge part of who I am, and the reason I read this book.  I live in Kansas now, but there isn't a day that goes by that I don't think of moving back home.  I will be one of those odd people who actually retires back north.  Minnesota is in my blood, and I never tire of reading books that are set in such a grand state.  So when I saw this book at the library book store for less than two dollars, and was set in a version of Minneapolis very different from the reality, I knew I had to get it.  Of course, it took a few years to read it, but the deed is finally done.

I will have to admit that I'm not normally charmed by alternate reality fiction, especially when it's about the past, but for some odd reason, I was hooked on this book from almost the beginning.  I think it had to do with the characterization, both good and evil, and in the way the author was able to flesh them out in such a way, that I bought into the narrative.

Of course the plot, on it's face, is believable, but maybe not on such a global scale.  I think it's perfectly rational, if stretching the science a bit, for a pandemic to kill off one race and the leave the others alone, we already have diseases that only afflict people with certain racial backgrounds.  I'm just not sure setting in the 1920s, made the idea of a pandemic doing such a thing, plausible or not.  I understand that it's during World War I, and that Spanish Influenza spread like wildfire, but in my head at least, the two diseases would have to spread differently.  I'm probably over thinking it, but that's just who I am.

What really won me over was the idea of using such a global catastrophe to explore race relations in the 20s, given the backdrop of one race slowly dying out.  Of course, I didn't live back then, but the way it was talked about, felt real to me, and sheer violence in thought, from both sides, made me sick at times, but it felt a little similar even today.  I know we like to say race relations have improved over the years, and I think for the most part, that's correct.  But there are still segments of all the communities that have resentment over one issue or another, and in many ways, they still rear their ugly heads.  So it was interesting to see both white and black characters in the book say and do things, that while it would make me sad, wouldn't surprise me if I saw it happen today.

Even the mystery of who is doing the killing is cleverly worked into the overall narrative.  It's what allows all the divergent characters to come into contact with each other, which allows for some explosive and dynamic relationships.  I fell petty hard for most of the characters, including the main bad guy.  I understood where he was coming from, in a rather twisted and egotistical way, he felt real.  At times, I forgot I was reading a book that did not happen.  I'm not sure how these characters would have been written had the Hun not happened, but I am sure that they couldn't have been written any better than this.
Posted by Ryan at 12:00 AM

I generally don't like alternate reality fiction either but you've made this sound good!

I agree with Kathy; in fact, I could have written her comment. Terrific review!

Your review does pull even more interest for the me too.
Thanks for sharing.

This novel sounds great Ryan and B&N just happens to have it as an ebook since it's out of print that's nice.
I'm a huge fan of apocalyptic alternate history so this sounds right up my end of the world as well know it alley.
thanks
deb