The Gods of Gotham by Lyndsay Faye 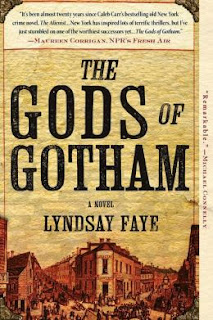 Timothy Wilde tends bar, saving every dollar in hopes of winning the girl of his dreams.  But when his dreams are destroyed by a fire that devastates downtown Manhattan, he is left with little choice but to accept a job in the newly minted New York City Police Department.

Returning from his rounds one night, Tim collides with a girl no more than ten years old... covered in blood.  She claims that dozens of bodies are buried in the forest north of Twenty-third Street.  Timothy isn't sure whether to believe her, but as the image of a brutal killer is slowly revealed and anti-Irish rage infects the city, the reluctant copper star is engaged in a battle that may cost him everything...

I'm almost positive that this will be my last mystery review of the year.  I was finishing this one around the time I was starting to feel burned out on my favorite genre.  I'm not saying this book was the nail in the coffin, because it wasn't.  I actually loved this one, the narrative voice was a standout for me, and it kept me entertained the entire time I was reading it.  Instead, I blame Bev of My Reader's Block and Yvette of in so many words....  They have been feeding my addiction for years now, and that addiction is finally wearing me down.  I have always been a mystery lover, especially those of a certain age.  But it's been getting to know those two wonderful bloggers, that has caused my addiction to really take off.  So I'm giving it a rest until the beginning of next year.

I have been wanting to read this book for a while now.  It's been recommended to me over and over again by those who love mysteries, and even a few that just enjoy a well written book, regardless of genre.  For whatever reason, I kept putting it off, and putting it off some more.  Then lightning struck, the heaven's opened up, and a ray of light hit my bookcase in such a way, that it made not picking up the book all but impossible.  I was a moth being drawn to a flickering light, with no way to escape my fate.

I have to admit, my fate was in pretty good shape by the time I turned the last page, and closed the book for the final time.  I got lost in the New York City of old, and quickly found myself getting involved with the characters lives, and caught up in their action.  Much like 31 Bond Street by Ellen Horan, The Gods of Gotham drew me into the streets.  It allowed me to breathe in the same air, smell the sewage and mud running in the streets, feel the heat of the fire that gutted a huge section of the city, and live the terror that the Irish were feeling in a new city, hated by everyone else around them.  It made the city, and the time period, a living breathing entity.  And I thank Lyndsay Faye for her brilliant ability to spin a yarn.

I had trouble with the flash jargon. I know the author was trying to bring authenticity to the story but it took me out of it. I am in the minority on that, though. Most people felt the way you did.

Oh I do get what you mean. Sometimes you do need a break to get back to what you love to read. Glad this one ended the year with a bang. :)

Yvette has done the same for me! What a treasure of a blog.

This book has been on my list, but I still haven't made my way to it. Great review.

Sometimes a break does a world of good, so hope you can dive back into your mysteries after the New Year!

I love to read novels about NYC as well as the immigrant experience so this sounds like one I should consider, especially with your recommendation.

I enjoy mysteries but find I only like to read a few a year. There is a burn-out factor to all genres, I think.

This book sits on my shelf unread - someday I hope to get to it :(