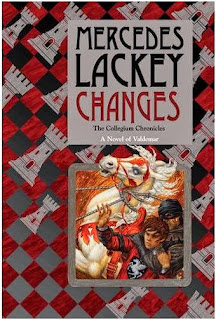 Mags was a Herald Trainee in the brand new Heraldic Collegium in Haven, Valdemar's capital city.  Though his background of unimaginable poverty and abuse set him apart from most other trainees, nonetheless he had found his own special group of friends.  Bear, Lena, and Amily were all students whose situations in life set them apart from more usual trainees, and together the four friends struggled to help one another find the solutions to their individual problems.

But Mags' friendship with Amily brought him to the attention of her father Nikolas - the King's Own.  The seemingly immortal Companion Rolan had chosen Nikolas to suit the specific needs of the current monarch, and those needs were for an agent who could collect information surreptitiously - a King's Own spy.  Nikolas recognized the same traits in Mags that Rolan had recognized in him.  Both were inconspicuous with an almost uncanny ability to fade into the woodwork.  Both could mimic low-class behavior and pidgin speech.  Both were unusually expert at observing the situations around them, and at ferreting out hidden motives.

So Mags began training as Nikolas' partner.  They worked in disguise at night in one of the seedier parts of Haven, where Nikolas had set up a false identity as a pawnbroker and fence.  Hiding in the shadows behind the desk, pretending to neither hear nor speak, Mags could better "observe" the clients, and even the surrounding neighborhood.  And Nikolas could send him out on "errands" to chase down leads.

But this new job was far more dangerous than Mags had ever considered.  For there were mysterious agents in the city - agents who sought to bring down the kingdom, and no one knew where they came from or who they worked for.  They were smart, talented, and preternaturally fast.  And most of all they were willing to do anything - anything - to bring Valdemar to ruin.

I suck at reviewing fantasy, so it's a good thing that this wasn't a review book.  As usual, I adore anything Mercedes Lackey chooses to write.  Her books, even if some of them repeat the same themes, are comfort reading for me.  I love the world she has created with the Velgarth books, which feels like a second home to me anymore.  Whether the book takes place in Valdemar, Karse, Rethwellen, Haighlei, or the lands of the Hawkbrothers, I feel comfortable as soon as I open the cover.

This is the third book in The Collegium Chronicles, which is the only series in the Velgarth books that is over three books long.  There are other series that take place right after the previous, but no others that are longer than a trilogy.  I actually read this earlier in the year, and didn't realize that I have yet to write a review of it.  It wasn't until I was started reading the fourth book, Redbout, that I discovered the oversight.  So here I am, months later, getting caught up.

Changes continues the journey of Mags as he continues to come into his own as a Herald trainee, and a future spy for Valdemar.  He is still trying to piece together his past, which seems to be tied up with assassins from Karse.  The assassins are back and are determined to wreck as much damage as they can.  This time around they try to kidnap Amily, the daughter of Nikolas, the Kings Own.  For the most part, the action takes place in the last third of the book, which means the first two thirds are the build up and character development.  This isn't groundbreaking writing, but it's familiar and comfortable, and it's home for me.
Posted by Ryan at 12:00 AM

I don't "get" fantasy so I don't even try anymore (I love the movies though). I also find it difficult to review books which are an integral part of a series as oppose to a series with recurring characters but standalone books.