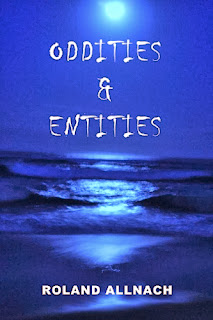 Set in the mysterious space between the everyday world and an existence just beyond reach, Oddities & Entities traces a path through the supernatural, the paranormal, and the speculative.  With moments of horror, dark humor, and philosophical transcendence, these tales explore a definition of life beyond the fragile vessel of the human body.

It's not often that I agree to review a book by a small press or a self published author, but when Trish at TLC Book Tours is the one offering the book to me, it gets my attention.  This last round of offerings, I ended up picking up two such books, and Oddities & Entities by Roland Allnach, is the first of those two to be reviewed.

The collection of six stories started off with a bang.  The first story, "Boneview," was so good, it surpassed every expectation I had.  In "Boneview" a young woman can see through to the bones of everyone she sees, it allows her to see their overall health.  Her sight attracts an entity from the other side, an entity who befriends her with presents, but is so creepy, that it's fairly obvious the creature has an ulterior motive.  The story tracks her life from childhood to adulthood, it tells the tale of a young woman who goes from a artistic loner, to a happily married woman, and all the pain in between.  I'm not going to go to far into the details, because of all the stories in this book, it's the one I would want everyone to read.

The next two stories, while not as strong, still held my attention and kept me entertained.  The final three stories, I really could have done without.  They didn't seem as well constructed as the previous stories, nor did they feel as if they were as well grounded.  It was like a movie that starts of so strong, that you know you are going to love it.  Then for whatever reason, the director decides to make the movie way too long, which weakens the story and leaves it's audience bored by the end.  I'm not saying that I was bored by this collection, but I wish it had been shorter.

I would like to thank Trish of TLC Book Tours for the opportunity to read and review this book.  Please visit the tour page to read other reviews.
Posted by Ryan at 10:06 AM

I want to thank Ryan for taking the time to review my book, 'Oddities & Entities'. I appreciate honest appraisals of my writing and welcome positive comments, as well as opinions of well stated impressions. Reading any book is a private experience, and I value the honest expression of such an experience to aid my growth as an author.
Happy reading,
Roland Allnach
fiction@rolandallnach.com

I'm definitely more likely to take chances on a book if the ladies at TLC are offering it. Glad this one worked so well for you.

I'm glad to see that one of the stories was a huge winner for you.

At least one of the stories was excellent. I wonder if it being first set the bar too high for the rest.

When I was putting 'Oddities & Entities' together, I put "Boneview" as the first story because I thought it not only encapsulated many of the things I wanted to explore with the remainder of the book, but also hinted at where those explorations might go. There's a lot there, and perhaps that density of material constitutes a greater punch than the more subtle philosophical extensions in the following stories. In the end, I know it's a matter of opinion, and something for each reader to judge on his or her own.
Happy reading,
Roland Allnach
fiction@rolandallnach.com

I'm reading this one for my own stop right now and agree, "Boneview" was fantastic! I've not gotten any further just yet but I so love a great short story collection these days. I'm looking forward to reading more tonight.

Becky, I'm so happy you enjoyed "Boneview". I'll restrain myself from saying anything more except that I hope you enjoy the rest of the book as much as its opening tale!
Happy reading,
Roland Allnach
fiction@rolandallnach.com