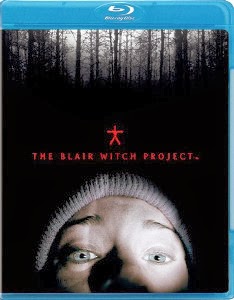 The Blair Witch Project follows a trio of filmmakers on what should have been a simple walk in the woods... but quickly becomes an excursion into heart-stopping terror.  As the three become inexplicably lost, morale deteriorates.  Hunger sets in.  Accusations fly.  By night, unseen evil stirs beyond their campfire's light.  By day, chilling ritualistic figures are discovered nearby.  As the end of their journey approaches, they realize that what they are filming now is not a legend... but their own descent into unimaginable horror.

It's not often that I fall in love with a horror movie when it first comes out.  I've never been a big fan of slasher movies, and this move to torture porn, just annoys the hell out of me.  There is nothing scary about those movies, they're just gross.  How anyone over the age of twelve can be scared by those movies, is beyond my thought process.  For that matter, how anyone over the age of ten can even find most of those movies interesting, boggles the mind.   I want a movie that plays with my head, makes my heart race, and keeps me interested the entire time I watching it.

Don't get me wrong, I'm not saying that The Blair Witch Project is the perfect scary movie, because it's not.  I can name about ten movies of the top of my head that terrify me more than this one could ever dream of doing.  But, it does what I want a horror movie to do.  It's takes a simple premise, builds a story around it, and allows the imagination to kick in and fill in the gaps.

When it first came out in 1999, I wasn't buying into the fake hype that this was a "real" movie.  I couldn't even tell where that idea was coming from.  I was watching TV interviews with the actors involved, something that would be impossible had they all died in real life.  Despite all the hype, I found the idea intriguing so I finally talked a friend of mine into seeing it with me, and I was it was love at first sight.

To be fair, the theater was not the right venue for this movie.  In a crowded theater, full of idiotic teenager who can't take anything seriously, it's a little distracting.  It's a little hard to focus on the screen, when those same idiotic teenagers are either laughing of screaming.  Even with all the crap going around me, I found my flight or fight response kicking in.  My pulse was racing, my breath was catching, and I found myself jumping a few times.

Where this movie shines though, is watching it on your couch, cuddled up with the lights off, and nobody else around.  This is the kind of movie that really screws with your head when nothing is around to distract you.  The first time I watched this at home, my instincts didn't want me to walk into the basement.  I actually had to force myself to walk down the stairs.  For any of you who have seen the movie, you know why a basement would not be a good thing.  This movie has to have one of the creepiest endings to ever grace the silver screen.  I watched this movie the other night, and that ending still scared the crap out of me.
Posted by Ryan at 11:03 PM

I've heard the camera work in this is very shaky - between that and the fact I'm a big chicken has made me avoid this one..

I was a senior in high school when this film came out. I've always been a scaredy cat, but I actually had to leave the theater with this one. I was so so spooked. Later that night, several of the guys in my group snuck out and put a pile of sticks and stones in my car seat. Joke was on them....I made them ride with me all the way home and walk me to my door. :)

I haven't watched this in a long long time. But I remember when I first saw it I thought it was scary and clever!

Not a big horror fan, so never watched this one. But I do have fond memories of old Vincent Price movies, which always left the scary stuff to your imagination! Loved those movies!

Hi Ryan Happy Halloween
I agree with you about this film what it's really responsible for is a whole new film genre the not made for prime time movie
thanks for making me remember it.
deb

A lot of hate out there for this one, for sure. To be fair, it DID spawn the found footage schtick, which has been done to death, and rarely done as effectively as this one.

And I totally agree that this is a home movie experience and NOT a theater-friendly flick. I went to a Halloween screening back when it first came out and I got nauseous midway through. First time that's ever happened in a theater for me, and I blamed it on the shaky cam.

I've never watched this movie, though it intrigues and impresses me for all the reasons you mention--the simple premise, the imagination's role, etc.

I love the idea of this movie, but I am a WIMP and want to be able to sleep at night!

I'm a little weird, I love reading horror, even though it scares the poopie out of me but I can't watch a horror movie ... gives me hellish nightmares. I'll take your word for it on this one Ryan lol

I've never seen this one; probably never will if it's going to scare me out of going into my basement. I'm sometimes forced to watch scary movies with my family but I only ever allow myself to be talked into it if it's going to mess with my mind and not just be gory. "Fallen" was one of the scariest movies I've ever watched and you never actually see a bad guy.