Among the Mad by Jacqueline Winspear 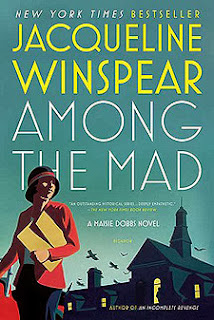 Christmas Eve, 1931.  On the way to see a client, Maisie Dobbs witnesses a man commit suicide on a busy London street.  The following day, the Prime Minister's office receives a letter threatening a massive loss of life if certain demands are not met - and the writer mentions Maisie by name.  Tapped by Scotland Yard's elite Special Branch to be a special adviser on the case, Maisie is soon involved in a race against time to find a man who proves he has the knowledge and will to inflict destruction on thousands of innocent people.

I have a habit.  Granted, it's a habit that ebbs and flows, and isn't one that plagues me at all times.  It doesn't rule my life, nor are their signs I can watch for, to make sure I'm prepared for the onset of it.  And I never know when it will leave me alone for a while.   I know you have no clue as to what I'm talking about, so I will fill you in.  I tend to latch onto an author for a while, reading their books in a gluttonous fashion.  I've done it my whole life.  Agatha Christie, Robert Jordan, Mary Roberts Rinehart, Terry Brooks, David Eddings, Erle Stanley Gardner, and now Jacqueline Winspear have all been targets of my stalking.  I fall in love, roll around in their worlds, and eventually run out of books, or start to get a hangover.  I think I'm somewhere in between on the Maisie Dobbs books.  I'm almost out of books to read, and I think I've reached a point where I have a full tummy.

It's not to say I didn't enjoy Among the Mad, because I more than enjoyed it, I loved it.  I'm just thinking that it's going to be a while before I pick up the remaining few books that I need to get to.  Maisie is one of those characters I want to know in real life.  I'm not sure she would find me interesting enough to be my friend, but I sure would like the chance.  And to be honest with you, I'm not even sure it's Jacqueline Winspear I'm getting mind weary of.  I think it has more to do with the genre, and the type of mystery she writes.

You all know that I'm a mystery fanatic, normally, I can't get enough of them.  I think I'm starting to reach a point where I really do need a break from them though.  I'm not giving up all mysteries, but I think I need to start reading a few more books, of various genres, in between them.  And when I do read a mystery, it will more than likely not be set in England between the two World Wars.  I think the setting, time period, and themes explored; are getting to be a bit much for me.  I'm starting to drown in war fatigue, both figurative and literal.

I know I haven't really given you a lot of reason to read this particular Maisie Dobbs book, but all you need to do is read my other reviews, for her other books, and you will understand why I loved this book as well.  Actually, this is probably one of my favorites, as I really enjoyed seeing Maisie change focus, and be brought into the government fold a bit more.  It's an interesting dynamic, and I wonder what the series would have been liked had it happened earlier.

I love going book crazy, that was me and Robert Jordan. so mad

I want to fall in love with Maisee too so I need to start with her from the beginning, I think.

I'm starting to feel the same way about mysteries: where I used to be able to rely on them when I need 'comfortable' reading, I've been disappointed at the last few I've picked up. I don't think it's so much the books as me. (P.S. I love this series too.)

I haven't loved this series as much as you do, but I did love your review. Intrigues me, makes me want to read more of Winspear's books. I read the first three and have a few more on my TBR pile.

I've only read one Maisie Dobbs book so far...so I have a ways to go before I've overdosed.

This sounds like an interesting premise and I have seen that you enjoy her books. I have never read her. Unlike you, I jump from author to author. I imagine for the same reasons I can't read one book at a time- I am a random person with an aversion to sameness. :D

Oh yes... I do the same thing. I become very obsessed either with a series, a genre, an author, whatever... and go book crazy. Then I need a break. So I totally hear you. I get where I become sort of apathetic about a book and I know it's because I need to change it up or take a break period. Then I reread it and have a different experience with the book.

And ditto on the war fatigue.