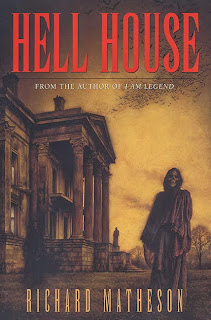 For over twenty years, Belasco House has stood empty.  Regarded as the Mount Everest of haunted houses, it is a venerable mansion whose shadowed walls have witnessed scenes of almost unimaginable horror and depravity.  Two previous expeditions to investigate it's secrets met with disaster, the participants destroyed by murder, suicide, or insanity.

Now a new investigation has been mounted, bringing four strangers to the forbidding mansion, determined to probe Belasco House for the ultimate secrets of life and death.  Each has his or her own reason for daring the unknown torments and temptations of the mansion, but can any soul survive what lurks within the most haunted house on Earth?

My good friend, Michelle of The True Book Addict, loves this book.  I'm not sure if it's one of her favorite books, but I know she really likes it.  Before this, I had only seen the movie, which was okay for me.  It was typical of the period it was made in, but it didn't blow me away.  I would gladly take the movie versions of Burnt Offerings or The Sentinel, over the movie version of Hell House.  But I still wanted to read this book.  I adore haunted house stories, so how could I go through life without reading one of the biggest of them all.

Needless to say, I went into this with high expectations.  In my head, I was comparing this to The Haunting of Hill House by Shirley Jackson.  It's not really a fair comparison though, other than both books dealing with a group of investigators moving into a haunted house to find the source of the problem, they really don't have anything else in common.  Oh wait, they do have everything in common, so the comparison is fair.  Or at least, it's not unfair to the two books.

And it's with that comparison, fair or not, that Hell House just doesn't live up to what I was wanting it to be.  I'm a fan of Richard Matheson, I Am Legend is one of the best horror novels ever written, but his writing can not compare to Shirley Jackson.  Where Richard Matheson can creep me out, Shirley Jackson can mess with my head and have me creeped out for days after I've turned the last page.  So maybe this whole comparison thing won't work, maybe I do need to figure out a way to separate them in my head.

Belasco House definitely lives up to it's reputation of being the granddaddy of haunted houses.  It's a home with no working windows, so it gets no natural light from the outside.  It's surrounded by a moat with a miasma of evil hovering above it, shrouding the house in even more darkness.  And if there weren't enough, every type of ghostly phenomena, from apparitions to violent attacks, can be witnessed and experienced in the house.  Where Hill House screws with your head, Belasco House will rip it off and use it as a soccer ball.

Given all of that, I still think Hill House scares me more. And that's because of Shirley Jackson and in the way she writes.  Granted, I would never step foot in Belasco House, but it's Hill House that epitomizes the haunted house of my nightmares.
Posted by Ryan at 12:00 AM

I love this analogy: "Where Hill House screws with your head, Belasco House will rip it off and use it as a soccer ball."

That was a good analogy. HaHa! Isn't it funny that in the remake of The Haunting someone did lost their head? You're not laughing. I know you hated that remake.

I was intrigued by the film version of Hell House for years which was why I finally read the book. I really loved the book so much more. I agree that Burnt Offerings and The Sentinel are far better films.

My friend, I'm afraid we will never agree on which book is better. While I enjoyed The Haunting of Hill House, it just did not grab me the way Hell House did. And yes, it is one of my favorite horror novels and probably in my top 20 of favorite books.

I did so enjoy Hill House because it messed with my head - I love not really knowing. Scares me much more than actually seeing the scary stuff. But I'm bound to read this one...because Michelle is a book pusher, as you know!