The Window at the White Cat by Mary Roberts Rinehart 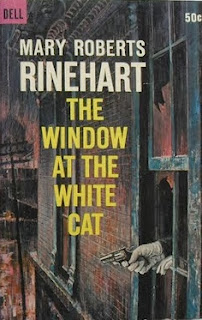 Politics and poker... that was the occupation and preoccupation of the members of the White Cat Club.

Once on the inside, a man's business was his own and nobody gave a damn if he was mayor of the town or a champion pool player of the first war.

It was a noisy, crowded, masculine kind of retreat, which explained the sign that hung proudly over the door:  "The White Cat Never Sleeps."

But murder entered the wakeful chambers of the White Cat, and it's victims slept the deep sleep of the dead.

So this will be my last Mary Roberts Rinehart review of the year, and I'm really not sure when I will have a chance to review another one.  Not because I still don't love her books, but because I don't have anymore to read.  What's worse, I think I've finally emptied the used bookstores in Wichita of their Rinehart books.  I can still find the books I already own, but I'm afraid there are no "new" ones to find.  If I have to end my Mary Roberts Rinehart love fest for a while, at least it was with a book I really enjoyed.  After the last few books of hers that weren't strictly mysteries, it was nice to get back to her writing at it's best.

One aspect of this book that I don't think I have ever touched upon before is the way she is able to tell the story from a man's perspective.  Almost all of her books are told in the first person, and she is one of the few that does an equally good job telling the story from the perspective of male and female characters.  Either way, the narrative voice comes across as authentic and natural for the time period and for who the character is.  Even when the smallest aspects of romance are involved, which there always is in a Rinehart mystery, if the narrator is a man, it never feels forced or fake in any way.  I wish I could say that about most authors, but from what I have seen in the past, that's not normally the case.

The other side of her books that I almost always enjoy, and do so here, is the way in which she incorporates all the side characters into the story.  Whether they are family members, doctors, police officers, or suspects; the secondary characters are always fun, and almost always as well developed as the main characters.  I wish modern mystery writers would develop that skill, though I will admit that some, like Louise Penny and Tana French, do a great job at it.

One of these days, I'm going to try one of her books and will think of you while I do.

You can always download a lot of her books from Gutenberg.org.

This sounds very good and I haven't read this author in a very long time. I love the cover too. This is a very useful review.

It's great to find an author who you love--I like your comment about liking it when an author really incorporates the minor characters into the story. I think this makes the fictional world seem more real and rich and layered...like life!

You might check out paperbackswap.com--I found some Rinehart there. I love this site--while I have lots of books, and keep on getting more, I don't feel compelled to keep every book I've ever read, and this is a wonderful way to get older paperbacks in particular.

I am glad you enjoyed it. I found it pretty entertaining too. The heroine wasn't too appealing but the sister-in-law was a pretty good character. And I loved the bantering b/w the narrator, his brother and sister-in-law.