Knife of Dreams by Robert Jordan 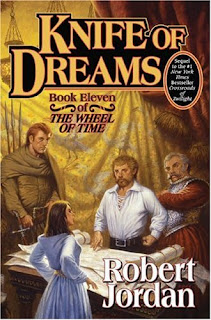 The dead are walking, men die impossible deaths, and it seems as though reality itself has become unstable:  All are signs of the imminence of Tarmon Gai'don, the Last Battle, when Rand al'Thor, the Dragon Reborn, must confront the Dark One as humanity's only hope.  But Rand dares not fight until he possesses all the surviving seals on the Dark One's prison and has dealt with the Seanchan, who threaten to overrun all nations this side of the Aryth Ocean and increasingly seem too entrenched  to be fought off.  But his attempt to make a truce with the Seanchan is shadowed by treachery that may cost him everything.  Whatever the price, though, he must have that truce.  And he faces other dangers.  There are those among the Forsaken who will go to any length to see him dead - and the Black Ajah is at his side....

Unbeknownst to Rand, Perrin has made his own truce with the Seanchan.  It is a deal made with the Dark One, in his eyes, but he will do whatever is needed to rescue his wife, Faile, and destroy the Shaido who captured her.  Among the Shaido, Faile works to free herself while hiding a secret that might give her her freedom or cause her destruction.  And at a town called Malden, the Two Rivers longbow will be matched against Shaido spears....

Fleeing Ebou Dar through Seanchan controlled Altara with the kidnapped Daughter of the Nine Moons while traveling with Valan Luca's Grand Traveling Show and Magnificent Display of Marvels and Wonders, Mat attempts to court the woman to whom he is half-married, knowing that she will complete that ceremony eventually, but Tuon coolly leads him on a merry chase as he learns that even a gift can have deep significance among the Seanchan Blood and what he thinks he knows of women is not enough to save him.  For reasons of her own, which she will not reveal until a time of her choosing, she has pledged not to escape, but Mat still sweats whenever there are Seanchan soldiers near.  Then he learns that Tuon herself is in deadly danger from those very soldiers.  To get her to safety, he must do what he hates worse than work....

In Caemlyn, Elayne fight to gain the Lion Throne while trying to avert what seems a certain civil war should she win the crown....

Int he White Tower, Egwene struggles to undermine the sisters loyal to Elaida from within....

The winds of time have become a storm, and things that everyone believes are fixed in place forever are changing before their eyes.  Even the White Tower itself is no longer a place of safety.  Now Rand, Perrin and Mat, Egwene and Elayne, Nynaeve and Lan, and even Loial must ride those storm winds, or the Dark One will triumph.

As you can see from the synopsis, things are starting to come to a head in this book.  By the way, this was the last book Robert Jordan wrote before he died.  The remainder of the series was finished by someone else, but more on that in the next review.  As usual this is more of a collection of thoughts, than an actual review.  I'm not sure it's even possible to write 14 different, full fledged reviews for this series, without going a bit mad.  And believe it or not, this is the first book in the series that wasn't a reread for me this go around.  I've owned it for forever, and thought I had read it, but once I got going, I realized I hadn't.

Rand continues to be in such a dark place, all egotistical and delusional.  Not willing to really listen to anyone but himself, and still assuming that he is going crazy.  He is a little drunk on power after cleansing Saidin, even if nobody really believes it.  He concocts a plan to do away with a few of the Forsaken, and loses a hand and part of his sanity along with it.  I know he eventually gets out of this funk, but it sure is annoying.

Perrin and his quest to rescue his wife, finally comes to a close.  The body count is ridiculously high though, and it involves an alliance with the Seanchan.  The slavers are represented by General Tylee Khirgan, the only Seanchan I ever like.  But that may have more to do with the fact she really doesn't go off on the wild tangents her race is so disliked for.  Long story short, the Shaido Aiel are destroyed, Galina Casban is taken away, and poor Aram is killed.  I never really liked Aram, but to have him turn on Perrin and force Perrin to kill him almost broke my heart.  Faile shows her lust for blood at the end, but I'm not sure taking out the Prophet wasn't the smartest thing she ever did.

Poor Mat.  The guy is stuck to Tuon, the Daughter of the Nine Moons and the new Empress of Seanchan due to a bloody civil war, orchestrated by a Forsaken, which left the entire imperial family dead.  I'm just wishing the same thing had happened to the Seanchan on these shores.  For whatever reason, other than stupid plotting, Tuon cements the marriage between them and Mat becomes Prince of the Ravens.  What's even worse, Mat has fallen for the twit.  The one thing he does that I support fully is pledge Thom Merrilin to rescue Moraine, who isn't dead after all.

Elayne avoids some plots, secures the throne, and continues to bore me still.  I just wish Birgitte would go away.  And can I also say, the love quadrangle between Rand, Elayne, Aviendha, and Min is starting to annoy me at this point in time.  It was the one plot device that I just never got the point of.

Egwene starts to rock for me again, and she continues on that streak for the rest of the series.  Now that she is inside the White Tower, even if it's as a prisoner, she starts to sow doubt about Elaida do Avriny a'Roihan.  She uses her spine and backbone and proves to many in the tower, that she is the true Amyrlin.

Nynaeve sends Lan on a suicide mission, though, not without messing up his plans.  She forces him into a position where he is forced to accept the throne of a kingdom that no longer exists.  I really enjoy the two of them, and find myself rooting for them.

Galad, how I hate you.  You are an insufferable prig, who can never admit to be wrong.  But what you do in this book is just awesome.  By taking out the head of the Whitecloaks, he becomes their new leader and changes the destiny of that organization for all of eternity.

Loial gets married, and proves once again why he is the man.

Mazrim Taim's true colors are starting to shine through.  He's such a sexy bad ass, that I'm still able to forgive him at this point in time.  I know I'll hate him by the end, so I have to enjoy it while it lasts.

And last, but not least, I want the Seanchan wiped off the face of the planet.  I know I'll never get my way, but I keep praying for it.

This is a series that people into fantasy always freak out that I haven't read! Well, I do intend to one day. You and B really have me looking forward to it when you both do your reviews. :)