A Cold Season by Alison Littlewood 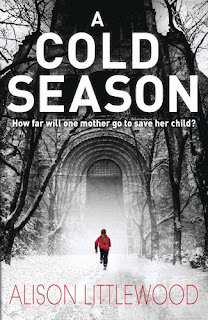 After the battlefront death of her husband, a soldier, in the sands of the Middle East, a distraught Cass moves to the bucolic, picture-perfect village of Darnshaw with her young son.  Since Cass's website design business can be run from anywhere with an internet connection and Ben could benefit from a change of scenery, a move to the highlands village seems like just the thing.

But the locals aren't as friendly as she had hoped and the internet connection isn't a reliable as her business requires.  And when Ben begins to display a hostility that is completely unlike his usual gentle nature, Cass begins to despair.  Finally, the blizzards thunder through and Darnshaw is marooned in a sea of snow.

When things look their blackest, she finds on sympathetic ear in the person of her son's substitute teacher.  But his attentions can't put to rest her growing anxiety about her son and her business.  And soon, she finds herself pitted against dark forces she can barely comprehend.  The cold season has begun.

So I'm really to the point where I'm getting bummed out from my review books.  I go into every review book with so much hope and and promise, assuming that I'm going to love the book. Then for whatever reason, it just doesn't work for me.  So I guess it's official, I'm in a reading slump.

I will admit that part of it's my fault.  I'm second guessing myself when it comes to review books, which means I'm saying yes to books that I'm just not sure about.  They aren't what I would normally say yes to, but something about it makes me want to say yes, and despite my hesitation, I do.  It could be the setting of the book, the synopsis, or even the cover that makes me want to say yes, despite my misgivings.  If I had a resolution for the rest of the year, it's to go with my initial response, and say no more often than I say yes.

When is comes to A Cold Season, I knew better.  I'm a huge horror fan, but horror novels rarely work for me.  The plots tend to be predictable, the characters one dimensional, and the plot twists cliche.  But since I'm always on the lookout for the few that don't fall into the same old patterns, I'm constantly sticking my neck out when I shouldn't be.

This time around is no different the others.  We have a small, isolated town where the people act oddly, and the atmosphere is just off.  When our main characters move to town, the child starts to act weird, the mother finds solace in a new man, and that man turns out to the be the devil.  I couldn't tell if that is supposed to be with a small d or a big D, but I'm not sure I cared enough to find out.  It's something out of a Lifetime movie of the week, and it's just as silly.

I'm not going to give up on horror novels, because I know someday I will find another book that compares to The Haunting of Hill House, Drawing Blood, The Sentinel, Burnt Offerings, Bedbugs, or even Dead Sea.  I'm just hoping I don't have to go through ten more books as predictable as A Cold Season.
Posted by Ryan at 12:00 AM

I don't even like horror and that plot sounds familiar to me.

Sorry you were let down. I'm not a horror reader, or watcher at that.

Maybe take a break from review books and read something you know and enjoy? Maybe it'll help. :)

Hope the next book is not as disappointing! I am not a big fan of horror, but the plot sounds intriguing.

Ryan what a great review. Thanks for bringing this to my attention :)