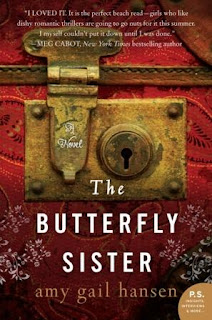 Twenty-two-year-old Ruby Rousseau is haunted by memories of Tarble, the women's college she fled from ten months earlier, and the painful love affair that pushed her to the brink of tragedy.

When a suitcase belonging to a former classmate named Beth arrives on her doorstep, Ruby is plunged into a dark mystery.  Beth has gone missing, and the suitcase is the only tangible evidence of her whereabouts.

Inside the bag, Ruby discovers a tattered copy of Virginia Woolf's A Room of Ones' Own, the book she believes was a harbinger of her madness.  Is someone trying to send her a message - and what does it mean?

The search for answers leads to Tarble.  As Ruby digs into Beth's past, she has no choice but to confront her own - an odyssey that will force her to reexamine her final days at school, including the married professor who broke her heart and the ghosts of illustrious writers, dead by their own hand, who beckoned her to join their tragic circle.

But will finding the truth finally set Ruby free... or send her over the edge of sanity?

I'm always a little leery of suspense novels that have a theme to them.  Miss Me When I'm Gone by Emily Arsenault used the country music of women who died too young and lived too hard to explore the life of one of it's characters.  With The Butterfly Sister by Amy Gail Hansen, we have a novel that uses the writings and lives of female authors who committed suicide to explore the main character's life.  Miss Me When I'm Gone, despite a promising plot, had issues with trying to weave the plot around the theme.  I'm afraid I had some of the same issues with this one as well.  Trying to tie in the various authors and their works, never felt organic to me.  It was a lot like Miss Peregrine's Home for Peculiar Children in that regard.  It was more like the author chose which writers she wanted to use, and tried to tie the story around them and certain works.  I wish she had allowed the the plot and character needs, to dictate the way in which the suicidal authors and their writings appeared in the book.

The story is there, I wanted to like it.  Actually, I wanted to love it.  Instead I'm left feeling a bit let down, because instead of having a young woman deal with the very real issues of suicide, depression, and delusions; we are left with an inconceivable plot device used to explain it all away.  The ending felt like a stab in my heart, and took all enjoyment I had had for Ruby and her struggles, or for the missing Beth and the fear I felt for her, and dashed it upon the rocks.  It turned a side character I really liked into someone I'm just baffled by and wishing it could have been different.  The entire thing left me shaking my head, closing the last page, and promptly forgetting the entire thing.

Such a shame this one didn't work out... really like your turn of phrase, 'the ending felt like a stab in my heart'. I have not read it myself and am unlikely to based on the weaknesses you highlight - high praise to the creator of the cover art though.

Oh man, I hate when that happens.

Thanks for the honest review Ryan, I can always count on that.
deb

I liked the sound of it after reading the synopsis but I dislike when something comes off as a pointless plot device rather than being a natural inclusion. Nice honest review :)

It actually sounds like a book I would like from the synopsis, but if I ever get my hands on it, I will go in with my eyes open because of what you said. Great, constructive review, Ryan!

It is so disappointing when you really want to love a book. The story does sound good. You mentioned Emily Arsenault. I loved The Broken Teaglass, but have read so-so reviews for Miss Me.

I liked this review even if I probably won't read the book (doesn't sound like my kind of thing anyway). I wish I had your knack for talking about books I didn't like. I can feel that you really wanted to like this. I hate when that happens. :)