Heirs and Graces by Rhys Bowen 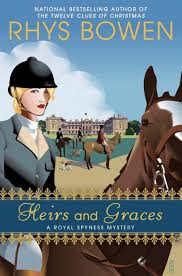 As thirty-fifth in line for the throne, Lady Georgiana Rannock may not be the most sophisticated young woman, but she knows her table manners.  It's forks on the left, knives on the right - not in His Grace, the duke's back...

Here I am thinking the education I received at my posh Swiss finishing school would never come in handy.  And while it hasn't landed me a job, or a husband, it has convinced Her Majesty the Queen and the dowager duchess to enlist my help.  I have been entrusted with grooming Jack Altringham - the duke's newly discovered heir fresh from the Outback of Australia - for high society.

The upside is I am to live in luxury at one of England's most gorgeous stately homes.  But upon arrival at Kingsdowne Place, my dearest Darcy has been sent to fetch Jack, leaving me stuck in a manor full of miscreants... none of whom is too pleased with the discovery of my new ward.

No sooner has the lad been retrieved than the duke announces he wants to choose his own heir.  With the house in a hubbub over the news, Jack's hunting knife somehow finds its way into the duke's back.  Eyes fall, backs turn, and fingers point to the young heir.  As if the rascal weren't enough of a handful, now he's suspected of murder.  Jack may be wild, but I'd bet the crown jewels it wasn't he who killed the duke...

There are very few series that I'm addicted to, and even fewer cozy mystery series that I can handle reading one after another.  There is just something about Rhys Bowen's writing and her creation of Lady Georgiana Rannock, that I find to be like cotton candy crack.  It's light, fluffy and more addicting than the real thing.  I can't stand the smell of cotton candy, so I'll take Georgie and her capers any day of the week.

When we last saw her in The Twelve Clues of Christmas, Georgie finally seemed to be on the right track.  Her relationship with Darcy was getting to be a little more real for both of them, and her mother acted as if Georgie's needs mattered to her.  Her mother's interest is quickly dispelled in the opening pages of this installment, not that anyone should be surprised by that.  Georgie's mother doesn't really have a natural maternal instinct.  Luckily for Georgie, she is quickly swept off to a country manor, at the insistence of the Queen of course, to help a young heir adjust to his new surrounding.

This book, as all the rest in the series, is filled with murder and humor in equal doses.  Georgie is becoming one of those characters that I would never want to spend to much time with, despite how much I love her.  It just isn't safe to be around her.  Much like Jessica Fletcher, somebody always dies when she is around.  It's not her fault, but I would rather not take any chances.

My only quibble, and I just thought of it as I was typing, is how gay men are treated throughout the books.  Whenever there is a gay character, he is treated as either a joke or a jackass.  The only exception is Cole Porter who turns up every once in a while, but even he isn't portrayed as a well rounded character, more as a caricature.  I'm not sure it's really something the author has thought a lot about, though I hope this trend isn't on purpose.  And while it's not enough to make me stop reading the books, because I do love Georgie that much, I do hope at some point in time we get a gay character that feels a little more real to me.
Posted by Ryan at 12:00 AM

Lol, poor thing, everyone always dying around her

When you mentioned the way gay characters are portrayed, I thought maybe this is an older book so I looked it up and was surprised to see it's not.

I have never read any of Rhys Bowen's books. Sadly, I may never because I can't even seem to get to the A. Christie's I own, nor the Sherlock Holmes, nor the Mary Roberts Rinehart's (which I really want to get to them all).

I too really hate when books make gay people out as buffoons, jokes, or jackasses. It's just so...shitty.