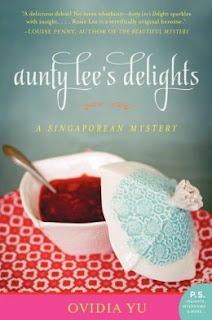 After losing her husband, Rosie Lee could easily have become one of Singapore's "tai tai," an idle rich lady devoted to mah-jongg, and luxury shopping.  Instead she threw herself into building a culinary empire from her restaurant, Aunty Lee's Delights, where spicy Singaporean home cooking is graciously served to locals and tourists alike.  But when a body is found in one of Singapore's beautiful tourist havens, and when one of her wealthy guests fails to show at a dinner party, Aunty Lee knows that the two are likely connected.

The murder and disappearance throws together Aunty Lee's henpecked stepson Mark, his social-climbing wife Selina, a gay couple whose love is still illegal in Singapore, and an elderly Australian tourist couple whose visit - billed at first as a pleasure cruise - may mask a deeper purpose.  Investigating the murder is rookie Police Commissioner Raja, who quickly discovers that the savvy and well-connected Aunty Lee can track down clues even better than local law enforcement.

As most of you know by know, I'm a huge mystery fan, though I tend to prefer older mysteries over the ones being written today.  With very few exceptions, I'm not a fan of "cozy" mysteries, and the vast majority of modern mysteries I have enjoyed, tend to be more along the lines of a police procedural.  With all that in mind, you may be surprised that I agreed to review Aunty Lee's Delights by Ovidia Yu.  As you can tell from the synopsis, this is what most would consider a "cozy" mystery.  It's a little old lady, who is a culinary enchantress, solving a murder or two, as she dispenses advice and feeds those around her.  But I have a fondness for little old ladies, how can you not love Jane Marple and Maud Silver.  Besides, it's set in Singapore.  How could I not want to review a mystery set in Singapore, a city/country I have always wanted to visit.

To be perfectly frank with you guys, through the first 1/3 of the book, I was kicking myself for my choice.  Singapore be damned, I just was not getting into this story at all.  The characters, even Aunty Lee, were getting on my nerves.  The story and dialogue felt choppy, and I was getting tired of googling every word I wasn't familiar with.  I can't say that any of those issues ever really changed for me, I think they remained issues for the entire length of the book.  But for some bizarre, inexplicable reason, they stopped mattering to me as much.

Aunty Lee will never be in the league of Miss Marple or Miss Silver, but her open heart and good nature, are cause enough to forgive her blunt form of being a busy body.  The rest of the characters, with few exceptions, I can take or leave them.  They tended to be overly whiny, full of themselves, or too concerned with appearances to really take them into my heart.  Even the killer was whiny, and that's one thing I can never forgive in a mystery.  I want the killer to be confident and strong, or at the last clear in their motives.  This time around, we are treated to a self absorbed whiner who doesn't stand a chance against a true villain.

I did like Senior Staff Sergeant Salim, who is the rookie investigating the case, not as the synopsis claims Commissioner Raja, who is Salim's boss, and not a rookie at all.  Now for some odd reason, the synopsis has this wrong, as do most of the reviews I've read of this book.  I'm not sure how so many are missing this, but it's not fair to Salim.

I liked the three secondary gay characters, one was the girlfriend of one of the dead women, the other two were the son of the Australian couple, and his Chinese boyfriend.  It's in the way the author treated these characters with dignity and respect, despite the way some of the other characters treated them, that truly won my heart.  But it was really in the way, that despite the limited page time these characters had, their stories forced the entire book to revolve around them.  This was a murder mystery that happens because one of the victims was gay, and everything she was trying to do in order to live her life.  Everything else that happens in the book, spins off of that one fact.

I'm not sure if this book is, or will be, part of a series.  I'm not even sure I would read another if it was, but I will say that I'm glad I read this one.  I may not be in love with Aunty Lee the way I am with Miss Marple, but she was fun to meet and spend a few hours with.

I love mysteries and one set in Singapore is the icing on the cake. Glad you liked it.

You've piqued my interest enough that I'd like to read this one.

Thanks for being a part of the tour.