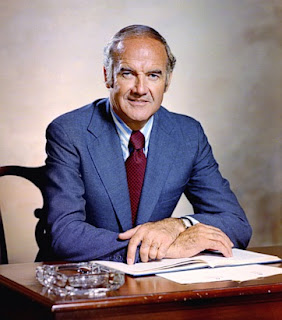 I woke up this morning to new that one of my political heroes, the former senator and presidential candidate, George McGovern had passed away.  A true liberal, in every way, McGovern fought for the issues I cared about and never apologized for his beliefs.

He started his public service career as a pilot in World War II.  He served with bravery and distinction, earning the Distinguished Flying Cross.  He started his political career in the 1950s in the House of Representatives, before moving to the Senate.  He ran for president in 1972, but was beaten handily by Richard Nixon.  I think many of us would like to believe things in this country would have been so much better had McGovern won.

George McGovern was a true public servant who should be thanked and honored for his years of service.  He will be missed.

Oh, I am saddened by this news! I remember campaigning for him in the 1970s.

He was also a historian who wrote a book about The Coalfield Wars. A pretty good book, too.

The only knowledge I have of McGovern comes from Family Ties. Sad, but true.

Totally agree! I was thrilled to be able to meet him when he did a reading of his book, The Third Freedom: Ending Hunger In Our Time. I loved that he never backed away from the Liberal label, and I wish I had been old enough in 1972 to have voted for him.

Great tribute for a great American.

When my dad was young, he was pretty set in his Republican ways but by the time McGovern ran for president, he was firmly set in his life-long Democratic stance. Hence I was raised believing very much in the things that George McGovern advocated. We have lost a very good man.