The Case of the Borrowed Brunette by Erle Stanley Gardner 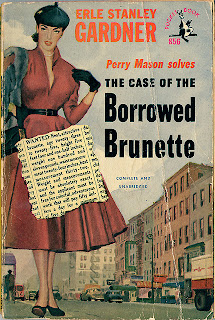 A Brunette on every corner!

Perry Mason and Della Street counted eight in succession, standing on corners a black apart, before pulling up to the curb to investigate.  That's how they met Cora Felton, the eighth brunette, and Eva Martell, her roommate, and Adelle Winters, the chaperone who carried a .32-caliber revolver as a persuader.

It wasn't just curiosity for long because Mr. Hines, who paid Eva $50 a day to wear another woman's clothes, was found dead with a bullet in his brain, and Perry Mason himself was suspected by the police of hiding the killer.  To get out of that jam he had to find a lot of right answers, quick, from a lot of wrong people.

It had been a while since I've picked up a Perry Mason book, but with the Hallmark Movie Channel showing a couple of episodes a day, I was feeling a burning desire to delve into the Perry Mason that exists on the page.  Now I'm not saying I don't love Raymond Burr as Perry Mason, cause I do.  I had the hugest crush on him as a kid, hence my life long love of all things Mason related.  But the Perry in the books is just a bit harder, which makes him just a bit sexier.

This time around, Perry gets mixed up with a scheme that seems to have no purpose.  Why would Mr. Hines want Eva to pose as another woman?  There doesn't seem to be anything illegal at first, but when Mr. Hines ends up dead and Adelle's gun is found in a garbage bin, everything is turned upside down.  It quickly becomes apparent that the woman Eva was impersonating was up to no good, and that Mr. Hines was in on it.  But is she the murderer, or did Adelle or Eva do it?  It's up to Perry, with the help of Paul Drake, to find out what is going on before someone else ends up with a bullet in the head.

It was an intriguing mystery that kept me guessing almost the entire time.  There were a few times that I thought I knew who the killer was, but then something else would happen and I would start second guessing myself.  In the end I did figure it out before the big reveal, but some aspects of how Perry figured it out never even dawned on me as important.  What I really enjoy about this series is that none of the plots feel rehashed, I'm sure a few are, but Gardner was adapt at making them feel fresh.

I've never read a Perry Mason book and I'm not even sure I've seen a whole episode of the TV show. I really should try one of the stories to see how they've held up over time.

I don't think I've ever read a Perry Mason story either. I remember the TV show, but didn't really watch. I was more an "I Dream of Genie" and "Gilligan's Island" type of girl. :)

I've only read one Mason book (earlier this year--The Case of the Grinning Gorilla), but I've picked up a whole bunch of them in those little pocket-size books that I love. I see them appearing in next year's Vintage Mystery Challenge...

I love the cover! I have to confess I thought Perry Mason was written for TV, like Murder She Wrote.

I've only read one Perry Mason, but I have a couple more on the shelf. I should pull one out one of these fall days.