When it starts to get a little chilly out, when the nights start to get a little longer, when the wind gets a little crazier in the night, when the shadows start to suggest things your brain doesn't want to think about, and when the slightest noises start to creep me out, I love nothing more than to put A DVD in and allow myself to get as scared as I've ever been.  Now some of those movies, may not bet the typical horror movies most minds turn to during the month of October.  Since I was a kid, some of the scariest scenes have been found in cartoons.  Who can watch the "Night on Bald Mountain" scene in Fantasia and not be scared.  As a kid, it terrified me.  Leave it to Disney to be the creator of some of my favorite Halloween images.  Today's Favorite Fictional Character post comes from another Disney creation, The Adventures of Ichabod and Mr. Toad.  We will be leaving the Mr. Toad part out of this post, though I have nothing against Mr. Toad and friends.  Instead I will focus on Ichabod Crane, the wandering school teacher who settles down in Sleepy Hollow. 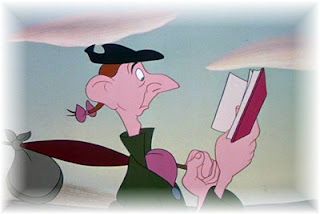 I must admit, and I'm ashamed to say, that I have yet to read Washington Irving's tale, The Legend of Sleepy Hollow.  It's an oversight I always mean to correct, but have yet to do so.  So today's post will not be about the character found amongst Mr. Irving's pages.  Nor is he the police inspector played by Johnny Depp in Sleepy Hollow, not one of my favorite Burton films.  Instead, my focus is on the Disney version, the gangly school teacher who struts into Tarry-Town and sets all the heads wagging in bewilderment.

Our Ichabod Crane is tall and lean, has shovels for feet, and a nose a bird could land on.  His knees stick out, his ears flap in the wind, and his ponytail could be used to pop a balloon.  He has the oddest shape, but all the women seem to fall for him anyway.  He has the voice of an angel, and even gives some of the local women voice lessons.  Of course they are after him, more than improving their voices.  He is the nerdiest of nerds, who still gets the women.  He is every gawky kid's hero.

Our intrepid hero has one little fault though, well two of them actually.  First of all, he's a little greedy for the "gentle" life.  He likes food, and when I say he likes food, he really likes food.  You wouldn't guess it by looking at him, but the man can put away whole chickens and still leave room for a pie or two.  He would love to settle down, well let's face it, with a rich wife who would be able to provide the life he so wants to live.  He thought he found it in the lovely Katrina Van Tassell, who seems to enjoy the attention a bit too much.  Or maybe she just likes to play him of her other suitor, Brom Bones.  She's a little minx who loves to watch the two men chase her over fields of golden wheat.  I'm not sure whether Ichabod is attracted to Katrina's look or her father's wealth the most, either way, he's set on winning her affections.

That brings us to Halloween night, and poor Ichabod's other fault.  He's superstitious to the core.  He won't walk under a ladder, cross the path of a black cat, and knows what to do when the salt is spilled.  He's a full fledged believer in spooks and spirits, and doesn't want to cross them.  It's a weakness Brom Bones is only too willing to exploit.  On Halloween Night, at the Van Tassell's party, Brom Bones tells the story of The Headless Horseman.   It's a story that Brom Bones hopes to scare the bejesus out of Ichabod to the point he will give up on Katrina, and leave her to Brom.

Now I'm not going to tell you what happen next, though I must say, every time I watch it, my pulse picks up and I sit up a little straighter.  Even though I know what comes at the end, I get nervous and a bit twitchy.  I urge Ichabod across that covered bridge, hoping against hope that somehow the end will change.  It never does, and deep down, I don't want it to.  Now you could choose to believe the rumors about his happy life in another town, but I don't.  I know what happened to poor Ichabod, and I'm so glad I get to witness it every Halloween.

I haven't read the book either but I did enjoy that cartoon! lol

It's amazing that most people's perception of Crane is from the Disney show.

Two years ago we went to Tarrytown, NY which is where Sleepy Hollow is, they have a great Halloween tradition and parties (also where the spy was capture carrying Benedict Arnold's letter to the British).

I've not only never read the story -- but I haven't seen any of the movies!! I need to remedy that, stat!

I never read the book either, and am embarrassed to admit that I've never seen the cartoon or the movie. Yet somehow, I know the story...

I love Disney's Legend of Sleepy Hollow... I was also thinking of Disney this week!! Here is mine!

I kind of like Ichabod, too! That was a fun cartoon.

I loved this cartoon when I was a kid! I used to look forward to watching it every year around Halloween. I have read The Legend of Sleepy Hollow and it's somewhat different than this version. Ichabod is actually quite unlikable in the Irving story, if I remember correctly. Of course, you won't be surprised to hear that I love the Tim Burton film. I think that may be the one thing we disagree on...Johnny Depp. ;O)

Unlike you, I do not much like scary movies/books. I jump 10 feet in the air when surprised by a person calling my name from behind me. It's ridiculous. I am going to try to watch a scary movie this Halloween. I figure a month of prepping for it will help. I am such a wimp lol.

I always have enjoyed the cartoon version of this story!