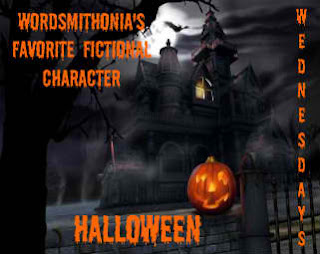 It's only one more week till Halloween, and I'm not sure what's scaring me more.  I've been watching a ton of scary movies and I've watched the last three presidential debates.  I don't want to offend anyone, but if you know me and my politics, you can probably figure out which one of the two candidates scares the snot out of me.  It's as if the writers in Hollywood are being challenge for creativity.  One of the two men seems to rival the scariest alien chameleon, in how he is able to morph into whatever he thinks people want to hear.  But anyway, I digress.  I will leave the politicking alone, and introduce you to one of the most tragic heroines to ever grace a horror movie. 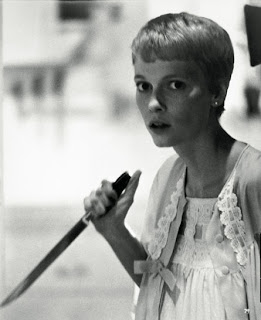 I'm going to admit right up front that my favorite sub genre of horror is the satanic conspiracy, especially those books and movies that seemed to pop up during the 60s and 70s.  For what ever reason, I just can't seem to get enough of them.  I'm always a little unsure in my head which movie hooked me first.  I know it's either The Sentinel (1977), Satan's School for Girls (1973, or Rosemary's Baby (1968).  I know others would list The Omen (1976) or The Exorcist (1973) as their first experience, but I'm pretty sure I didn't see either movie until I was an adult.  One thing I do know, it's Rosemary's Baby that has left the biggest impression on me, mainly because of the wonderful job Mia Farrow did in portraying Rosemary Woodhouse.

When Rosemary married Guy Woodhouse, she wasn't expecting much.  She wanted a loving relationship, a kid or two, and a nice home to start her new life in.  When they find the perfect apartment, their neighbors seem nice, if a trifle odd, and everything seems to be going the way she always wanted it to.  What she is unaware of, is her husband's growing desperation to hit it big.  He's been a struggling actor for so long that he is willing to do anything, including selling his soul to the Devil to make it big.

Of course poor, timid Rosemary has no idea this is going on behind her back.  When she becomes pregnant, she welcomes the news and gets ready to welcome the newest Woodhouse into the world, not knowing that he is really the son of Satan.  Through the odd behavior of her husband, the bizarreness of the neighbors, and some large leaps of imagination, Rosemary eventually comes around to the realization that she is having the Devil's baby, and from there she goes crazy.

Now I could leave it there and not really explain why I love a woman who started off so passive and meek, and ends up in the deep end with no lifeguard on duty.  It's because of the way she was brought to life by the actress who played her,   Mia Farrow did such a phenomenal job portraying a woman who has her life ripped out from underneath her that I can't imagine another actress in the roll.  Rosemary starts off as the submissive, mild wife who is willing to do anything to please her husband.  It's only with the revelation that things might not be what they seem, the a more dominant aggressive Rosemary emerges.

I don't know if it's the idea of a maternal instinct kicking in, or if it's the influence of Satan's see inside her, but the new Rosemary becomes quite the fighter.  As the pregnancy develops and complications occur, she starts to overcome her fears and fight for her baby.  She starts to suspect the neighbors of making her ill and it's only after she does her own research, that she discovers the truth of what is happening to her.  What really fascinates me though, is how her journey comes full circle.

Rosemary has become this fierce presence that is willing to take on Lucifer for the life of her baby, when she fails, she is even willing to kill her own child to stop him from wrecking havoc on the world.  But once she seems him, surrounded by his group of admiring cultists, her whole facade crumbles.  She becomes the meek woman who wants nothing more than to have her family, whole and intact.  She once again subjugates herself to her husband, or at least that is the way it appears at the end of the movie.  I have never read the book so I'm not sure how it compares, but her complete full circle transformation in the movies fascinates me every time I see it.

Mia Farrow was fabulous in that movie!

This one scared the hell out of me the first time I saw it - and, frankly, it still creeps me out. Farrow is great in it!

I was busy last week so I missed posting mine (though I too was going to pick Jack Skeleton!) Here is mine for this week!

I have yet to see Rosemary's Baby. Looks sooo scary!!