The Case of the Lucky Legs by Erle Stanley Gardner 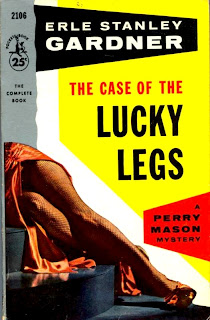 Perry Mason stared at the telegram...

He turned his attention to his desk.  It was a picture of a beautiful girl - from the tops of her silken-clad legs down.  Clipped to it was a slip of paper which read "The Girl with the Lucky Legs."

It looked like a most delightful case.  But that was before the famous lawyer-detective found himself right up to his neck in a swirl of locked door, swindles and murder!

When a young woman enters a beautiful legs contest, where the winner gets a movie contract, she has no idea what about to happen to her life.  After winning, she is taken to L.A. and left to fend for herself.  The business leaders of her town who were talked into financing the contest, were cheated out of the their money, and now two different suitors are in the city trying to find her and avenge her humiliation.  When the man who pulled off the con is found dead, it looks like there is no lack for suspects.  It could be one of two girls that fell for the scam, or it could be a young lady who came in second.  It could be one of the two suitors arriving in town, one who threatened the guy, the other who is willing to do anything to win the girl.

When Perry is hired to find the young lady in the picture, he didn't know that he was about to be mixed up with murder, blackmail, a frame up of unbelievable proportion, and be wanted by the police for hiding a fugitive.  Of course that last bit is pretty much standard fare for the attorney.  He knows the law, and how far he can push it.  Sometimes the cops think he's pushing it beyond it's borders, but Perry always manages to come up on top in these matters. It's when he's the most effective and dangerous.

This was an ingeniously layered mystery that seemed unbelievable at first.  How can anyone killer be able to control so many twists and turns without it being too contrived or sloppy.  Most authors would not have been able to pull this off, but Erle Stanley Gardner seems to do it effortlessly.  Most literary detectives would look like a fool in such situations, but Perry Mason comes across as confidant in his abilities to solve the caper.

This sounds excellent! I love that cover - is that the cover on your copy of the book?

This sounds like so much fun! I've never actually read an ESG story, and I feel wanting in that regard.

The cover is marvelous -- I love it!