Murder in Pastiche by Marion Mainwaring 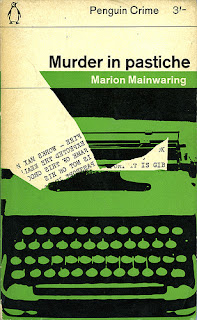 When a notorious gossip columnist is murdered aboard luxury liner Florabunda, the Chief Officer is sure the crime will be solved in no time.

For on the passenger list, by coincidence, are nine world famous detectives:  Jerry Pason, Spike Bludgeon, Trajan Beare, Atlas Poireau, Sir Jon. Nappleby, Broderick Tourneur, Miss Fan Silver, Mallory King and Lord Simon Quinsey.  In such a spot what murderer could hope to get away?

I've never been a huge fan of mystery parodies.  Maybe it's because I really hated Murder by Death, the really horrible parody movie from 1976, from the first time I watched it.  Now I know many people who love the movie, I just can never get into it.  I even tried watching it again once I was done with this book, I still can't stand it.

As you can tell by the names in the synopsis, this is a parody to rival all parodies.  It takes nine famous literary detectives, changes their names, and sets them on a boat where a rat like man is bumped off by a person or persons unknown.  If you are familiar with a good swath of detective fiction, you should be able to figure out who they are by the names, if not, the author takes it too another level.  She breaks the book down into sections, each section details the steps an individual sleuth takes to solve the case.  She not only uses the methods the detective would use, but she tries to duplicate the style of the actual authors who created the originals.  Now this wouldn't be a parody if the author didn't exaggerate the style and methods of both the creation and the creator.  She takes their quirks and makes jokes out of them, she takes their personalities and makes them into cartoons.

I think this is where mystery parody loses me, what I enjoy about most of the "real" detectives are their quirks and strange methodology.  Even if I whine and cry about a certain detective's egotism, I wouldn't have it any other way.  With the detectives I love, I don't mind that certain words get used too much or that every mystery they investigate can be solved using the same unique technique.  It's what makes Golden Age detective more interesting and different from the generic cozy mystery sleuths of today.

Now I'm not saying Murder in Pastiche was bad, it was okay.  They mystery and the motive I found to be clever and worthy of such a collection of heroes.  Other than the over the top Spike Bludgeon section, I didn't mind the author's version of these classic characters.  I just think that I prefer the original over the parody.

Doesn't sound like it's for me either, Ryan. I'm not fond of parodies unless they're created by someone with real writing talent.

In a way, Christie's early books were parodies because Hercule Poirot could be said to rival Sherlock Holmes in the quirks and brains department. Not to mention in the arcane-ness of their names. But Christie was a genius and that never hurts.

I don't often like parodies...so I steer clear of them.

Ah, now, see, I'm one of those who loves parody. And I've watched Murder by Death more times than I can count (and my son loves it too). I'm going to have to find this one.... Leo Bruce has one (Case for Three Detectives) that parodies three classic detectives. And I love that one too.

Murder by Death was a selection for the twitter movie club this month! I didn't see it because I had a family event to go to, though, so I can't say if I like it or not. It sounded fun...