Cards on the Table by Agatha Christie 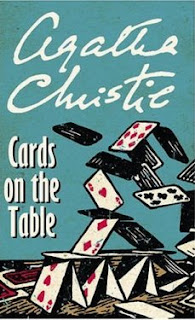 Mr. Shaitana is famous as a flamboyant party host.  Nevertheless, he is a man of whom everybody is a little afraid.  So when he boasts to Hercule Poirot that he considers murder an art form, the detective has some reservations about accepting a party invitation to view Shaitana's "private collection."

Indeed, what begins as an absorbing evening of bridge is to turn into a more dangerous game altogether....

I can think of very few characters that leave me both elated and annoyed at the same time, Hercule Poirot is one such character for me.  I really seem to have this bizarre love/hate relationship with him, that thankfully seems to be shared with his creator, Agatha Christie.  He is such a pompous, egotistical little guy, that I should be really disgusted by his attitude.  Fortunately, or not, his superiority complex is so well deserved, that no matter how annoying he can be, I can't help but excuse his irritating manner.  He deserves to act in such a fashion, because the man is brilliant.  He may be eccentric, egocentric, and just a bit of a dandy, but he's earned it all.  I take my hat off to him and his mustache.

In Cards on the Table, Poirot is invited to a dinner party to see Shaitana's "collection" of real life murderers.        When Poirot arrives, he is greeted by his host and a few of the other guests, who are not part of the collection.  Along with Poirot, Shaitana invited three other guests who are involved in the business of murder, but who don't commit murders themselves.  Along for the ride are Colonel Johnny Race, Superintendent Battle, and mystery novelist Ariadne Oliver.  Shortly thereafter, the showcases arrive, four men and women who Shaitana thinks committed murders that they got away with.  When the dinner party separates for bridge, the four suspects to one room, the four detectives to another, the party seems to be winding down.  When the party ends with Shaitana dead in a chair by the fireplace in the room the suspects were playing in, it seems that his "joke" bit him in the ass.

It seems it's up to Poirot and the others to figure out what happened and which of the other guests are actually guilty of murder, maybe more than one.  The investigation takes some winding turns and a few other bodies show up to muddy the waters, but in true Poirot fashion, the reality of the crime is never far from his little grey cells.  He, with the help of the others, puts all the pieces together and shows us all why he deserves to have an ego that's bigger than he is.

I need to try another Christie book - this sounds like a winner!

I too am love/hate about Poirot -- he's so aggravating and yet so awesome!

I think you'd like Poirot more if you watch the TV show. Daviid Suchet does such a lovely job with it that after you see it you can't help but picture his portrayal while you're reading and that may help you warm up the book version a bit more. There's a lot more of Hastings in the show and their interactions really humanize Poirot too. I think that's why I love Poirot so much, because I love Suchet's portrayal.

Anyway, glad you liked the book! :)

I'm always anxious to see what you think about a Poirot book!!! Sounds like it is a good one!

Ha! I LOVE Poirot! I think I have a love/hate relationship with Hastings. :)

"I can't help but excuse his irritating manner." So does Hastings who is often irritated with Poirot for dropping subtle hints about a case but never really explaining anything, not until towards the end of the story. Hastings is honest enough to admit he doesn't know how to use his grey cells. I haven't read this book yet. Incidentally, "shaitan" in Hindi means "devil" and I wonder if Christie borrowed it in full knowledge of its meaning in India.

Sad to say that I never really got into either Christie or Poirot. Does watching the old movies based on her books count? :)

Alexia561: The mini-movies or TV series, especially with David Suchet as Hercule Poirot, are well made and engrossing but I'd suggest reading Christie's books first. I haven't seen a film or TV series based on Christie's characters, Poirot and Miss Marple, in a very long time but I'm perfectly contented reading and re-reading her mysteries.

Just stopped by to see what you've been up to. I haven't had much time lately for blogging to hanging out online but I'm always in the market for a good book. I told myself that this would be the year that I would finally start reading mysteries but I think I'm going to need something with a bit of a romance to get me started. Though I do hope to try some Agatha Christie sometime soon.

I love Poirot and all his eccentricities. I really need to red some more Christie soon.

Mr. Shaitana is a hoot. Too bad he didn't know that appearance and actions are two different things.