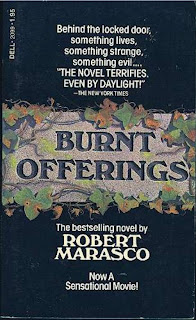 What Marian Rolfe really wants, more than anything else, is to get out of New York City for the summer.  She doesn't want to deal with her neighbors, the heat, or same daily routine she's been doing the previous summers.  When she talks her husband, Ben, into looking at summer homes to rent, she really lays it on thick.  She finds a old country estate on Long Island that seems to be perfect for them.  Maybe a little too perfect, considering the price is only $900 and they are able to stay for the entire summer.  Against his better judgement, Ben packs up his family, including their son David and Ben's elderly aunt, Elizabeth.

Once they arrive, the rundown manor quickly grows on them and they settle into a comfortable routine.  Their idyllic oasis is hiding a ton of secrets though, secrets that may kill them all in the end.

Two years ago, around Halloween, I caught the movie version of this on TV.  Since I had nothing else to do at the time, I settled in on the couch and got lost in what turned out to be a cheesy, but scary movie.  Ever since then I had wanted to read the book, but trying to get a hold of it proved to be harder than I had first thought it would be.  I finally found it at the flea market last year but had not time to read it until recently.  I have to say, that now that I'm done, I loved it even more than I thought I would.

The overall storyline itself is pretty simple.  A brother and sister who own a sprawling, occasionally rundown, country estate rent it out for the summer every few years to a "deserving" family, the bigger the better.  All they ask is that their elderly mother, who stays in her own room and will never be seen, be allowed to stay there.  All the renters need to do is bring a try to her sitting room three times a day.  What the siblings don't tell their renters, is that the house and it's grounds can only come back to life by draining the life out of them.  With each act of violence, each drop of blood spilled, or with each death, the house is rejuvenated and comes back to the glory of it's heyday.  What they really don't want to tell them is the wife, will by the end of their stay take the "mothers" place in that lonely room.

Now, that may sound pretty cheesy, and it is, but the way this horror wove the story together is brilliant.  There are so many creepy factors, like the emotionless pictures on display in the mother's sitting room.  The growing fascinating and love that Marian starts to have for every aspect of the house.  The violence in the pool when Ben came close to drowning David.  The mysterious illness and wasting away of Aunt Elizabeth.  The fact that nobody else on the island is willing to admit that they have even heard of the house or it's family.

The atmosphere this author was able to pack into the book is simply amazing.  There is a lingering sense of danger on every page, but it's a danger that lays just beneath the surface.  It's not visible all the time, but it's presences is felt with every word.  This is what horror should be like, not the crap that gets spoon fed to us now days.  This will be a book that I read over and over again when I need something to give me nightmares.

You made me a bit curious about the movie :) I do not think I have ever heard of it

Okay, when you said the grounds drain the life out of people, I realized this one's too scary for me.

Scary movies and I just don't mix..I'm a chicken...but I do like to read a great horror story. I'm glad you were able to track down a copy of this!

Is it bad that when I read, "Their idyllic oasis is hiding a ton of secrets though, secrets that may kill them all in the end.", the first thing I thought of was poison mold???

Sounds like a good book and movie. I enjoy haunted house stories, especially when the house itself it a character in the plot. Might have to check this one out if I can find it!

I love scary books and movies. At the moment I'm completely engrossed in season one of American horror story. The book you just described sort of reminds me of it. Thanks for the suggestion.