Odd And The Frost Giants by Neil Gaiman 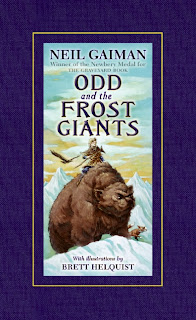 In a village in ancient Norway lives a boy named Odd, and he's had some very bad luck:  His father perished in a Viking expedition; a tree fell on him and shattered his leg; the endless freezing winter is making villagers dangerously grumpy.

Out in the forest Odd encounters a bear, a fox, and an eagle -  three creatures with a strange story to tell.

Now Odd is forced on a stranger journey than he imagined - a journey to save Asgard, city of the gods, from the Frost Giants who have invaded it.

It's going to take a very special kind of twelve-year-old boy to outwit the Frost Giants, restore peace to the city of the gods, and end the long winter.

Someone cheerful and infuriating and clever...

When I first sat down to write this review, all I was going to say was "I loved it."  Then I was going to finish the post with "Everyone should read it."  That's all folks.  Though I doubt that would really excite you, or would it?  Well either way, I'll never know.  There is no way I could leave a review at two lines, though I'm sure some of you would prefer that over my longer, rambling ones.

Ever since I was a little kid, I have loved mythology.  It doesn't even matter what pantheon of gods we are talking about.  Greek, Roman, Norse, Celtic, Babylonian, Egyptian, even American Indian; they were all fair game to a young boy that could never get enough of those stories.  So when I saw this book reviewed last year (maybe the year before) by a blogger I know I trust, Tasha of Truth, Beauty, Freedom, and Books, I knew this one would be for me.  I'm so glad that I listened to myself.

For such a short book, one that I ready pretty quickly, it packed one of the biggest escapism punches of the year for me.  For that brief amount of time, I was lost in another world.  A world that was ruled by gods who weren't really as powerful as they thought they were.  A world where a tricky Frost Giant can trick the trickster god himself into doing something really stupid.  A world where three of the most powerful gods to ever walk the Earth, can be turned into animals.  It's a world where those same animals get into trouble and have to have a crippled, twelve-year-old boy get them out of it.  It's a world that I really want to know for myself.

Odd, the young hero of the tale, is one of those boys that is way too clever for his own good, and he knows it.  He knows how smart he is.  From what I can tell, he has know problems letting everyone else know it too.  But he isn't that smarty pants kid that you couldn't stand in 5th grade.  You know the kid I'm talking about, we all had one in class.  Instead, Odd is the kid that you wanted to have as your best friend.  He is the resourceful one, the kid you can count on to get you out of trouble.  I figure if Odd can get Odin, Thor and Loki out of trouble, he should be able to do the same thing for the rest of us.

I really want Odd to make another appearance someday.  I would love to find out how he got along with the other Gods or how he settles into the lands of his mother.  He is one of those characters that deserved to have more than one book written about him.

Email ThisBlogThis!Share to TwitterShare to FacebookShare to Pinterest
Labels: Fantasy, Mythology, Reviews, YA

Thank you for the linkage, Ryan! I'm so glad you enjoyed this book. I'd love for more stories to be written about Odd!

Ryan, I wanted to stop by to wish you a wonderful Holiday; hope it means special time with family and friends.

Hi Ryan, just stopping in to say Merry Christmas to you and yours!Have a wonderful day.

Neil Gaiman is my literary god. Any time he does something with mythology, I'm automatically hooked. American Gods, Anansi Boys, the Sandman books...he puts such a unique spin on the myths we know and love. And now he's tackling Ragnorak!!!

So glad you enjoyed this one as I loved it! Odd definitely deserves more books!

I also liked Odd and the Frost Giants as well (my thoughts:http://manoflabook.com/wp/?p=701) but I like almost everything Gaiman touches.

I thought the book was writ­ten funny and sim­ply so a pre-teen child can under­stand it , the story telling is mas­ter­ful, the pace is per­fect.

I'm really digging your review of this. Now I know who to recommend this one to when the right student comes into the library. I didn't order this title but it comes in my monthly Junior Library Guild order. Sometimes, I just have so many books to process and not enough time to really read about them. Your review was awesome! It helped me out big time!

So glad you liked it! It's definitely one of my favorites by Gaiman.