Monsters of L.A. by Lisa Morton 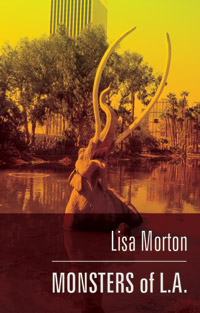 Frankenstein, Dracula, Mr. Hyde, the Phantom, the Hunchback... they're all here, the ones you grew up watching on the silver screen.  But these monsters aren't lumbering across a for-shrouded moor or clambering along the ramparts of a Gothic castle; no, they're here, in sunny modern-day Southern California, in place you know and may have visited.  That homeless vet with the rebuilt leg longing before the liquor store in Santa Monica - could that be Frankenstein's monster?  The eerie host making promised at the end of an Orange Country amusement park ride - is he really the Devil?  Some of these monsters you might recognize instantly - it's hard to disguise a Giant Monster, after all - but you'll never know what to expect in these stories that range from black humor to the farthest extremes of extreme fiction.

I've been on a huge short story kick this year, hopefully it will be a trend that continues into the next as well.  When I agreed to review this book, I wasn't sure what I had to look forward too.  Part of me was thinking that it would simply take the monsters I'm already familiar with and put them into L.A.  I really wasn't expecting what I got, though after reading the book, I'm doubly glad for it.

What Lisa Morton managed to do was way beyond what I thought this book would be about.  She was able to breathe new life into twenty staples of horror Hollywood.  Some of them are given new life by reinterpreting their original story.  Others are given the typical Hollywood treatment, but put into a situation that is new and fresh.  If you were reading her version of "The Phantom", you wouldn't recognize the character, but you would the basic concept behind it.  "The Haunted House" gives new meaning to the entire concept of what it means for a house to be haunted.  By the way, I want to move into that particular house.  "The Creature" is simply what it is, taken out of the Black Lagoon and inserted into the La Brea Tar Pits.  It's short and sweet and reminds me of the best moments in those old black and white movies.  "The Killer Clown" scared the hell out of me, of course it doesn't hurt that I'm petrified of the damn things.  The longest story, which is also my favorite, "The Urban Legend" was simply brilliant.  It took the legend of a race of lizard people living beneath the city and brought it to life through character and story.  It was a brilliant example of this authors work, work that I would love to read more of at some point in time.

Sounds like a great collection. I've been reading a lot more short stories than I used to, too, and this one sounds like a book I should pick up.

I've come to appreciate short stories more too. Some of those might be too scary for me.

I've also developed a new appreciation for short stories and this collection sounds fantastic. I'll have to see if I can find it.