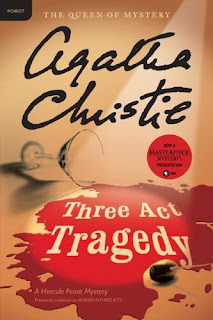 Sir Charles Cartwright should have know better than to allow thirteen guests to sit down for dinner.  For at the end of the evening one of them is dead - chocked by a cocktail that contained no trace of poison.

Predictable, says Hercule Poirot, the great detective.  But entirely unpredictable is that he can find absolutely no motive for murder...

I feel as if I had neglected Agatha Christie over this past year, especially when I discovered Mary Roberts Rinehart.  I feel like a spouse who has strayed a little too far, so here I am getting one last Agatha Christie book in before the end of the year.

This was a new one to me, though I had earlier seen the PBS Masterpiece Mystery! movie.  So I knew what was going to happen, but like most book to movie adaptations, the movie had left out a lot of details.  It was those details I was looking forward to discovering for the first time.  The biggest difference though was the deletion of Mr. Satterwhite from the movie.  He, more than Hercule Poirot is the star of this book.  For those of you who have no clue of what I'm speaking of, Mr. Satterwhite previously appeared in The Mysterious Mr. Quin, a book I reviewed last year.  Mr. Satterwhite is one of those older men who notice everything, study life, but never became jaded from it.  He's a great character, one that I'm glad to have met again.

There is no way I can got into the details of the mystery without giving too much away, but the title alone should give you clues into how many victims are claimed by the egomaniacal murderer, who just so happens to do it all out of a strange sense of misguided love.  It's one of the odder motives I've ever seen, but given the context of the overall storyline and the murderer's personality, it works.

Agatha Christie is by far, the most adapt author I've ever had the pleasure of reading.  She can spin a story on the end of a needle, throwing red herrings and clues with equal aplomb.  She is the perfect author and I adore her for it.

Glad you were able to sneak in another Agatha! I love her books...and now that I think about it, I don't think I've read this one. Like you, I've seen the filmed version...but if I read it, it's been so many moons ago that it's lost in the mists of time.

Hi. I agree totally that Christie is the perfect writer of mysteries. I read this many moons ago and can't quite remember the details. Perhaps it's time to re-read a few Christies. But with that huge TBR pile...

I love Agatha Christie! I haven't read this one yet but I did enjoy the recent Masterpiece adaptation.

I have not read a CHristie book since I was 12 and liked mysteries and thrillers, lol, a while ago

Christie's still my favorite, even after reading some of the other mystery writers of her time.

I love Agatha Christie -- I so need to pick her up again!

I'm glad as well that you were able to return to the Agatha fold, as it were. :)

We mustn't stray too far.

I just recently reread (for the umpteenth time) THE MAN IN THE BROWN SUIT, just for the heck of it.

I don't even make note of these rereads, they happen so often and usually on the spur of the moment in between everything else I'm reading. They are bon-bons. :)

Terrific review, Ryan. I particularly like what you have to say near the end: "She can spin a story on the end of a needle, throwing red herrings and clues with equal aplomb. She is the perfect author and I adore her for it."