Torchwood: The House That Jack Built by Guy Adams 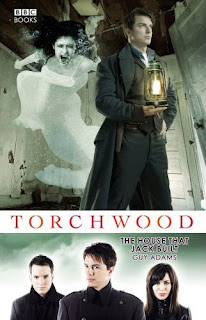 It's an ordinary sort of a house.  Except for the way the rooms don't stay in the same place.  And the strange man that turns up in the airing cupboard.  And the apparitions.  And the temporal surges that attract the attentions of Torchwood.

And the fact that they first owner of Jackson Leaves in 1906 was a Captain Jack Harkness...

Part of me is saddened that I've read this book and part of me is still bouncing up and down for joy.  The sadness comes from the fact that this was the last Torchwood book that I owned and the store I would buy them from, no longer exists.  Which means, unless I buy some on line (which I hate doing) this will be my last Torchwood read for a while.  The bouncing is caused by the awesomeness that this book was and how frickin excellent it felt to delve into the world of Captain Jack and the rest of the team.

I'm a sucker for a haunted house story.  I tend to devour every single one I come across and rarely ever walk away disappointed.  Now I'm not saying this book would hold up to Shirley Jackson's The Haunting of Hill House, but it's a fun, energetic spin on the genre.  The fact that it marries the haunted house with Torchwood means the book took the concept in a whole other direction than anything I've ever seen before.

Because of the time disruptions that Captain Jack has been so fond of making in the past, present, and future; some temporal beings have been attracted to the planet.  Unfortunately for the planet, those being are hungry for that energy and are trying to rip a whole in the fabric of reality and consume the entire Earth.  Now you may be asking yourself what the hell does this have to do with a haunted house story, and you would be right to ask that.  Normally alien life forms bent on destroying the planet have nothing to do with ghosts and spirits walking the halls of a home.

The focus point these beings decided to focus on was the home formerly inhabited by Captain Jack.  It's there that they feel they will be able to break through and get their hunger sated.  Their constant attacks though, ripple through time, altering the history of the house.  It causes the history of the house to become more violent.  People who lived there and lived there happily, suddenly die violent deaths.  Deaths they never experienced the first time around.  The constant barrage also alters the flow of history in the house.  It causes images of the past to appear in the present, it allows people from the past to actually materialize in the home, people who don't have the best intentions of the current occupants in mind.

Thankfully, though as usual it's a very close call, Captain Jack, Gwen, and Ianto are able to save the day, albeit with some help that like all things Torchwood, carries it's own baggage.

I'm grateful for this dose of Torchwood, but sad that it ended so suddenly.
Posted by Ryan at 12:00 AM

I had no idea this was a book before it was a series. I've never seen the show but the books sound interesting.
Go ahead and order online!

Can you get another store in your area to order the books? I hate to buy books online and get my indie to order books for me.

I had no idea either, Ryan. I must admit though, I stopped watching the series when they killed off Ianto.

I mean, huh?! In what universe does that make any sense?

But I enjoyed reading your review anyway. :)

I really, really need to read these books! Thanks for the great review Ryan! Captain Jack... *sigh*

I didn't realize that this was a book series...I feel a bit out-of-touch!! Hope you're able to track them down without resorting to online.