I was digging through some boxes the other day, don't remember what I was looking for anymore, when I found an old literary anthology from high school.  I had four items published in this one, three poems and a short story.  Though the anthology was published my senior year, I think I wrote the story in 1993, my junior year.

When I first reread it the other day, all I could do was notice the grammar mistakes I had made and the narrative flaws within the story.  In high school, I think I was really proud of it though.  If I remember right, it was an assignment in honor's English.  We had to take the idea of "Goldilocks and the Three Bears" and write a short story that captured that same idea.  I'm actually thinking of rewriting it now, but haven't made up my mind on that one.

For some bizarre reason, I thought I would share with everyone my feeble attempt at creative writing when I was only 16.  So with no further ado, I present to you..... 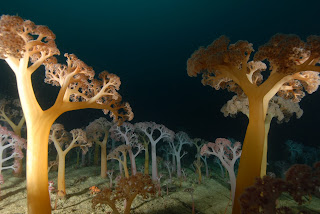 One day a little merboy who went by the name of Triton decided to go for a short swim in the coral forest just behind his house.

After a while he came upon a small, humble sand castle tucked away in the tall green and red coral towers.

When he swam up to the door, to get a closer look, he saw a note that said the tuna fish family who lives here went to the store and would be right back.

Being the curious little boy that he was, he decided to go in and look around.  As soon as he swam in, he was amazed by what he saw.  There were soft comfortable sofas and chairs, pictures of different fish all over the walls, and a pale pink coral table with a white marble chess set, that had green and blue coral merpeople as pieces.

One of the walls held nothing but a collection of books by Herman Shellville, Agatha Porpsie, Nathaniel Fishthorne, Frogert Burns, and Oyster Wilde.  As he was looking at A Picture of Dorian Stingray, by Oyster Wilde, he knocked over a bust of Sandson, a hero from a popular Elbib story.  Unfortunately the bust landed on the large chess set, not only breaking the bust, but also breaking the chess set in half.

Just about then, the fish family came home.

Since little Triton knew that if he got caught he would get in trouble from his parents and the local porpoise department, he decided to get out of there immediately.

As he left the coral forest, all events of the incident left his memory, and he thought of what future adventures lay ahead.
Posted by Ryan at 12:01 AM

So you're the one who started the mermaid trend! I love that you included books and I love the author names you came up with.

Very cute! Thanks for sharing.

Oh this is cute! I love the whole idea of the underwater theme. :) You know you should join us on Fridays with the Flash Fiction stories. We get the pics on Monday and post the story on Friday. :) I think you would have so much fun with it. :) Think on it.

Cute story, pretty good effort for junior high; my son's never turned out anything like that, unless I helped lol. I'm with Melissa, you should do Flash Fiction :)

"Herman Shellville, Agatha Porpsie, Nathaniel Fishthorne, Frogert Burns, and Oyster Wilde" - This is so incredibly adorable, Ryan! Thanks for making me chuckle.

I loved it. I think it's actually fun to go back and read what your younger and more naive self wrote back in the day!!! I'm sure I would laugh at all of my attempts in writing!! I think your story was cute and I loved all the cleverly altered author's names!!