Jane Was Here by Sarah Kernochan 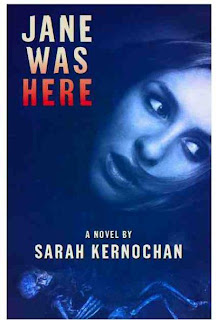 A mysterious young woman calling herself Jane turns up in a small New England town.  She claims a fragmentary memory of growing up in this place, yet she has never been her before in her life.  Upon her arrival, strange and alarming things begin happening to some of the town's inhabitants.  As Jane's memories reawaken piece by piece, they carry her back to a long-buried secret, while the townspeople hurtle forward to a horrific event when past and present fatally collide.

This was the second book dealing with reincarnation that I've read in the last two weeks.  I think after reading this one, I'm done with the subject for a while.  It's not that I'm not interested in it, because I am.  I has more to do with the fact that while that last book was okay, I felt like I had to pinch myself every 5-10 minutes in order to stay interested in this one.

My disconnect can be summed up in four words, lack of likable characters.  I'm okay with a few characters that I don't really like or even most of them being people I could care less about.  What I need though is at least one character I can care about.  If I don't, then I really don't care where the story is going or why things happen the way they do.  I don't care what happened in their past, present, or future.  Simply put, I just don't care.  And that is exactly what happened while I was reading Jane Was Here, I didn't like anyone.  Even the children were horrible little creatures that I could have cared less about.  Instead of caring about them, all I could think about was how happy the moment when they leave my life for good will be.

The author is an award winning screenwriter and in shows in the writing.  The plot points were engaging and she writes with a wonderful descriptive style.  I was able to picture every scene in my head in full detail.  I wish this was a movie instead of a book.  If I had watched this on screen, I could almost guarantee that I would have enjoyed it a lot better.  With movies, I don't need to care about the characters.  Watching the action on screen isn't as intimate for me, so I'm able to push aside any negative feelings I have for the characters and just enjoy what I'm watching.  I think this is a story that would translate wonderfully in celluloid and I would be more than willing to watch it.

It sounds like the book and the author have promise. Too bad it didn't work for you.

You may be done with reincarnation but reincarnation isn't done with you, haha! It's pretty tough getting into a book if I am unable to emotionally connect with any of the characters. In fact, I'm not sure if I've ever enjoyed a book with that kind of situation.

Sorry this one didn't work out for you, but agree that it's hard to stay interested in the story when none of the characters are appealing. I think I'm done with reincarnation stories for awhile as well, as they've just been too disappointing.

I agree with you in not really having to care too much when it's a movie. But not connecting with any character is almost always a bad thing for me.

If I can't connect then I can't read. I have to like at least one person cos why else would I care to finish the story? So yes perhaps not