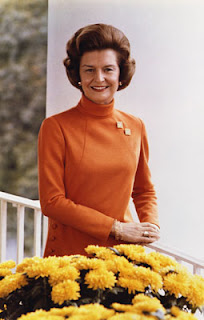 I am saddened by the news that Betty Ford, the former first lady of the United States and wife of President Gerald Ford, passed away at the age of 93.  Mrs. Ford was a women to be admired and not only for rising to the occasion when her husband became president, but for the issues she drew attention to as well.

While they were still in the White House, Mrs. Ford had to deal breast cancer.  Her bravery in the face of such an ordeal, was one that the entire country looked to and respected.  Because of the way she handled such a private issue, in such a public manner, Mrs. Ford gave inspiration to millions of women to start taking the issue seriously.

An addiction to painkillers and alcohol forced Mrs. Ford into the public spotlight once again years after the couple left the White House.  Once again she rose to the occasion and ended up inspiring an untold amount of people that they weren't alone and they too, could beat the addiction.

Mrs. Ford is someone who's voice and presence will be sorely missed.
Posted by Ryan at 8:16 PM

How did I miss this news? It's a sad day indeed. She was a class act.

I'm just hearing this news from you so thanks for sharing. Very sad. She was an inspiration to people. Wow, she led a long life though!

A very classy lady. She had a good long life and lived it well. She will be missed.

She was an awesome First Lady and an inspirational woman. She will be greatly missed! Thanks for the memorial post, Ryan.

Mrs. Ford was an amazing lady who was genuine, honest, and brave--not just for herself, but for an entire nation that looked to her. She was a true inspiration and will be greatly missed.