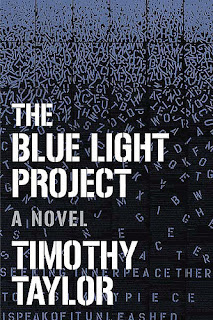 In a very near future that is both familiar and troubling, three live intersect in a time of crisis.

When an armed man seizes a television studio in the center of town, Thom Pegg, a former investigative journalist turned tabloid reporter, is as surprised as anyone to learn that he is the only person to whom the hostage taker will speak, bringing him inside the studio and in contact with a frightening truth.

From outside, meanwhile, the drama of the enthralled and horrified city is revealed through the eyes of two characters who meet in the early stages of the crisis and who bond to one another instinctively.  Eve is a former Olympic gold medalist and much loved local daughter.  Rabbit is a secretive street artist who has just completed a massive street art project involving mysterious installations at the tops of hundreds of buildings through the city.

It's a time of fear, a time when people have grave doubts about the future, and each other.  Yet, when events collide, and Rabbit's installation is activated, people are shocked into seeing the power of beauty in the world, and the real possibility of hope.

I have a feeling if I was 14 years younger, or more cynical, or even less hopeful about life, this review would be slightly different.  My take on the book itself would have been considerably altered, allowing me to connect with it more.  As it is, I'm a 35 year old optimist, who doesn't see the worst in things.  I'm not a paranoid type of person who thinks the government is out to get me or hiding things from it's populace.  Instead I'm someone who believes that most people who go into politics or run corporations are in it for the right reasons.  I know in the era of the Tea Party, that my way of looking at things may seem odd, but that's who I am.

That alone, made this book hard for me to get into, especially at first.  Instead of concentrating on the story, which at times felt a little too fragmented, I was more worried about where the story was taking place.  I spent so much time stressing out about what city the story was set.  I was so obsessed by the setting, I think, in order to give me something to grasp onto.  I'm still not sure, but by the end of it, I really didn't care anymore.

While it took me a bit to get into the story, I eventually did.  I won't say I loved it, but I was eventually able to enjoy what it was that was being presented to me to consume.  It did take me a while though, I had to put the conspiracy/paranoia aspect aside and pay attention to three main characters instead.  Once I separated the characters from the story, I was able to enjoy them.  They are all in transitional phases of their lives, even if they didn't know it at the time.  The story takes them on a journey of self discovery that will leave them changed for the better.

I would like to thank Lisa of TLC Book Tours for the opportunity to read/review this book.  Please visit the tour page to read more reviews.

I have a friend who is perfect for this book. I'll have to tell her about it. Great review, Ryan!

Nice job with this review Ryan!

Nice review :) And..oh I am still a cynic, very much so

I haven't started this one yet. Sounds like I shouldn't let my expectations get too high.

Hmm, I think I'm going to pass on this one. Nothing in the description really reels me in and after reading your lukewarm response to it I'm not particularly tempted to pick it up.

I like it! I'm a cynic and an optimist given different situations. I was a political science major, undergrad and was headed into law school before I found architecture and education so I tend to see both the very good and the very bad in legal and political worlds. Very good review, considering you don't seem to be the perfect audience.

Something’s wrong with the story if you couldn’t let go of the setting and focus on the narrative or characters.

I like your idealism re politics, Ryan; it’s very refreshing.

I hadn't heard of this one before, and although some of what you shared sounds good, I probably won't rush out for a copy.

I always like to know that the characters in a book develop and change, especially when it is for the better!