The Kid by Sapphire 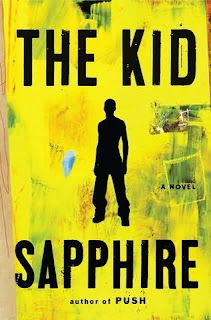 The Kid brings us deep into the interior life of Abdul Jones, son of Sapphire's unforgettable heroine, Precious.  A story of body and spirit, The Kid is a story of survival and awakening, and of one young man's remarkable strength.

We meet Abdul at age nine, on the day of his mother's funeral.  Left alone to navigate in a world where love and hate sometimes hideously masquerade, forced to confront unspeakable violence, his history, and the dark corners of his own heart, Abdul claws his way toward adulthood and an identity he can stand behind.

In a generational story that moves with the speed of thought from a Mississippi dirt farm to Harlem in its heyday, form a troubled Catholic orphanage to downtown artists' lofts, The Kid tells of a twenty-first century young man's fight to find a way to the future.  A testament to the ferocity of the human spirit, the deep nourishing power of love and of art, The Kid becomes a young man about to take flight.  Intimate, terrifying, deeply alive in Abdul's journey we are witness to an artist's birth by fire.

I never read Push, I wanted to but never really had the chance.  I did go see the movie, Precious, shortly after it came out and I loved it.  Some of what I saw on screen made me flinch, made me cry, and made me wish I was anywhere else but sitting in that theater.  When it was over, despite the overly optimistic ending, I loved it.  I thought it was a story of real life, a story that doesn't get told enough.  So when I had the opportunity to read the sequel to Push, The Kid, I jumped at the chance.  I knew it was going to be a hard read.  I knew that it would push my tolerance beyond what I can normally handle.  I was right, it pushed me right over the cliff and I'm not sure I've landed yet.

When the book opens, Abdul is waking up on the day his mother is being buried.  He doesn't really know what's going on and seems to be floundering beyond his understanding of what life is supposed to be.  That pretty much sums up my feelings about him throughout the book.  I know that life dealt him an unfair hand.  He lost his mother and the only source of security he ever knew.  He lost his name and with it his identity once he was put into the system.  He lost his innocence the first time he was raped and beaten by another boy.  He lost a piece of his humanity the first time he molested someone else.  None of that though felt as if he was choosing to live his life.  It was as if he was living by other people's standards.  Standards that should not be met by anyone.  I know that it's a harsh critique to make of a boy we first meet at 9 years old, but he didn't change that behavior until he was much older.

Unfortunately, by the time he did start to change, I didn't care anymore.  By the end of the book I can honestly say I became desensitized to what I was reading.  It's a horrible feeling to have about anyone, real or fictional.  It means that nothing they do or have happen to them, gets to you anymore.  Nothing that they do suprises you or really makes you pay attention to them.  The violence was so repetitive and so graphic that some coping mechanims within myself kicked in and forced me to stop caring about these characters.  Once that happened I was never really able to think about or react to what I was reading.  By the end, all I wanted was the book to be over.  I wanted to be able to close the cover and not think about what I had just read.

Once I closed that cover, I realized something.  Regardless of my wanting to put this book behind me, I knew that it wouldn't be that simple.  I know that no matter what, Abdul and his story will stay with me for the rest of my life.  Whether I read the book again or not, Abdul and his story have found a permanent home in my head.

I would like to thank Trish of TLC Book Tours for the opportunity to read/review this book.  Please visit the tour page to disocver other thoughts on The Kid.

I'm not sure I could read this one for some reason. It certainly has seemed to leave an impression on you.

It makes you wonder about the kids whose lives are like that. It sounds like reading this book is like getting kicked in the gut. I'm on this tour too and feel like I need to brace myself now.

Oh! After all she went through, his mom dies so young! I love this review; it lets us know that this is a hard story, and, I think, for those of us who haven't lived that life, should give the reader more insight into how life causes some people to turn out badly, even though we all feel that they should know better.

You find the most interesting books Ryan - books I usually miss but then I read your reviews and they blow me away!

"it pushed me right over the cliff and I'm not sure I landed yet" - That's a striking description - so blurb-worthy. Too bad it's not meant as a rave. There's only so much horror and evil a person can take and it looks like this book took you to the limit and beyond, if it pushed you over the cliff. I would probably react the same way.

I never realized Push was a book first. I did get to see the movie though. And to hear a sequel too. Hmm, but sounds like a eh read. Thanks!

The graphic nature of this book is definitely hard to swallow. I actually enjoyed it more than Push though.

Sounds like a brutal read and one that has changed you whether you wanted it to or not. Great insight!

I am on this book tour also, wish I had read your review after though.

I like how you were emotionally wounded somehow by reading, definitely a wow moment.

Sounds like a book that would just be way to tough for me to read. It does seem like a powerful book though.

I never read the book Push but I saw the film too and loved it. I had no idea that a sequel book had been written. It's funny you should talk about being desensitised about the violence - I was just writing about that kind of thing. I wouldn't mind giving this book a try though ... Just to see what would have happened after Push.

To get a best assignment help or dissertation help, So you don't have to worry because our team is specialist in all of these . We give this service from the natives of UK.

Do not come back in the interaction of more dilemmas. Read out this post and over enjoyed it as much as you can. It would be good to visit on our website and decide the valuable factors to give new wings with Online Assignment Help service. By doing so, you will get some positivism in your future.