Elegy For Eddie by Jacqueline Winspear 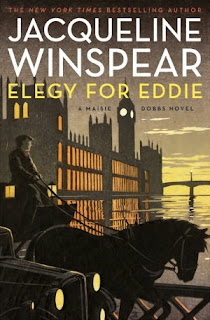 Early April, 1933.  To the costermongers of Covent Garden - peddlers selling fruits and vegetables on the streets of London - Eddie Pettit was kindness itself.  A little "slow," he was a gentle soul, more boy than man, with a gift for calming the most challenging horse.  His recent death in a violent accident has shocked his friends and neighbors.  They believe Eddie was the victim of foul play, but the police won't investigate.  Their only hope of finding the truth is Maisie Dobbs.

Maisie has known these men from childhood, when her father, Frankie, worked alongside them.  Determined to do right by Eddie, she plunges into the investigation.  They search for answers begins amid the working-class streets of Lambeth, where Eddie lived.  But before long, Maisie is following threads of intrigue to a powerful press baron, a "has-been" politician lingering in the hinterlands of power named Winston Churchill, and to the doorstep of a writer who is also the husband of her dearest friend, Priscilla.

In a series that is 9 books long so far, it's to be expected that at least one of them will in some way not be what you where wanting it to be.  Now granted this is only the 5th one that I've read so far, but I think it's safe to say that I finally reached that point with Elegy for Eddie.

I wish I could sit here and give you a point by point, detailed reason on why I was not able to connect with this one as much as the previous books, but I'm not sure I can.  On one hand, I found the mystery to be compelling.  I wanted to know why Eddie had to die and see those behind the killing punished for their crimes.  Sadly, both the reason for his death and the identity of his killer make both those things a bit harder to accomplish.  I understand why the author went this route with the book, but that doesn't mean I have to enjoy it.  The mystery itself was used more as a vehicle to tell a story that is more about the lead up to World War II than anything else.  Most of the action and characters revolve around the idea that Adolf Hitler is not the good guy some want him to believe.  They are concerned about a second great war that hasn't even been announced yet.  I found all of this fascinating, but wish the mystery wouldn't have had to be a third victim to the plot.

I think the other issue I had was in the character of Maisie herself, and this is where skipping some of the middle books may be kicking me in the ass (though I read the two books that precede this one.)  I found her to be a little too angst filled this time around.  She just can't seem to make up her mind or be happy with anything that is going on with her personally.  She is unsure of her romantic relationship, doesn't know what to do about her father, and is having a hard time dealing with the fact that she now has a lot of money.  Too much of the story was taken up with how Maisie seemed to be feeling sorry for herself, stuck in a malaise, and just a tad bit too whiny.  Now I know that a lot of the issues have to do with her experience in the Great War, the death of her mentor and improved fortune that resulted from that, and the fear that her country is going to be pulled into another war.  This book is all about transitions in that regard.  I just wish it wouldn't have been so painful to read.

Now I'm not saying this is a bad book or even an okay book, because it's better than that.  The writing is as great as it has been throughout the series, the story lines are intriguing  and never bore, and the supporting characters keep the pace moving at a brisk pace.  I guess what I'm saying is that in every series there are going to be books that don't make me coo with pleasure the entire time I'm reading them.  That's not a bad or good thing, it's just the way things are.

I would like to thank Trish of TLC Book Tours for the wonderful opportunity to read and review these books.  Please visit the tour page to read reviews of this book and the rest of the books in the series since the entire month of March is being devoted to them.
Posted by Ryan at 12:00 AM

Such a fantastic cover.

I agree. I think every series has a book that just doesn't pull you in the same way as the others did. That happened to me with the most recent Charlie Parker book. Hope it's only a blip in your case as this looks like an interesting series.

Too bad you couldn't connect tot he book Ryan, that happens to me as well once in a while.

However, I believe that it makes one a better reader.

Hopefully this is the only stinker in the series.

I wonder if skipping a few of the middle books led to your issues with this one ... that could be the reason, though who knows.

I'm glad that it didn't turn you off from the series as a whole. Thanks for taking the time to read and review this one for the tour.

"painful to read" - ouch! Often-times when I can't get into a book it's because I've been unable to connect with the protagonist as you did in this instance.

I do want to get to this series eventually, but I think I'll try to start at the begninning and go from there. Of course, you're right, everybook in a series can't be great, there's bound to be some that just don't work as well.