A Partial History of Lost Causes by Jennifer Dubois (Plus Giveaway) 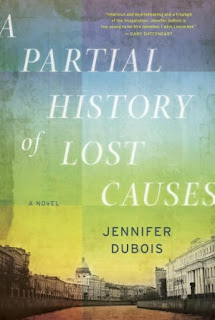 In St. Petersburg, Russia, world chess champion Aleksandr Bezetov being a quixotic quest: launching a dissident presidential campaign against Vladimir Putin.  He knows he will not win, but a deeper conviction propels him forward.  And in the same way that he cannot abandon his aims, he cannot erase the memory of a mysterious woman he loved in his youth.

In Cambridge, Massachusetts, thirty-year-old English lecturer Irina Ellison is on a improbable quest of her own.  Certain she has inherited Huntington's disease - the same cruel illness that ended her father's life - she struggles to find a sense of purpose.  Then Irina finds an old, photocopied letter her father had written to the young Aleksandr Bezetov, in which has asked the Soviet chess prodigy a profound question:  How does one proceed in a lost cause?  Since he had never received an adequate reply, Irina travels to Russia to find Bezetov and get an answer for her father, and for herself.

It's been a long time since I've read a book that is both beautifully written and depressing enough that I didn't want to finish it.  I found myself getting lost in the narrative voice of both Aleksandr and Irina.  Now normally when I say that, it's a good thing.  It would normally mean that the voice being used was so compelling that I became enraptured int he book and could no longer pay attention to anything else going on around me.  This time, it's a different story.  Both characters are so wounded psychologically that I really did want to get lost.  As in, put the book down and pretend it wasn't there.  I wanted to go out into the world of sunshine, kittens, and My Little Pony.  Needless to say I'm not a huge fan of any of those things, so for me to want to seek those things out is a little strange.

Irina was forced to watch her father die twice.  The first death was of his brain, which for both of them, is the most important aspect of living.  Once the mental abilities were gone, Irina observed the slow death of his body.  Now that she is facing the same disease, she kills herself first.  I'm not saying her character is a ghost, because she is still alive, but she isn't living life.  She has already given up, but she forces herself to believe she is doing the "right" thing.  She doesn't want to see pity from others nor does she feel she can really connect with someone else in anyway that is both true and real.  She has chosen to take the false stoic approach, which in my opinion means she's dead in everything but having her body in the ground.

Aleksandr on the other hand has been living in a limbo of his own.  He is in a loveless marriage that is more about habit than anything else.  He hasn't really ever let go of the prostitute he fell in love with as a young man or of his guilty in giving into the party system when he was playing chess.  He is living because of his guilt and anger, trying to correct things that really can never be corrected.  He is a shadow of his past and it's not until the end of the book that he really starts to live in the world again.

Both Irina and Aleksandr are compelling characters that I would have loved exploring on separate terms.  When the two of them were put together, it was just a bit much for me to deal with.  There was just too much life wasting away, not being fully lived.  It was a disheartening, depressing, and not something I could really enjoy at this point in time.  Now with that being said, I do know and can say with absolute conviciton, that one day I will pick this book up again, and I will love it.  I will be in the right frame of mind and be able to really connect with the characters without allowing their sadness to overwhelm me.

I would like to thank Lisa of TLC Book Tours of the opportunity to read and review this book.  Please visit the tour page to read other reviews (most of which raved about the book.)

What? You don't love sunshine and kittens?

That does sound like a very sad book. I'm not sure I could read about the death of Irina's father like that.

Sad books and wasted lives...I guess not a healthy topic for me but I admit I also feel drawn to this one.

"I wanted to go out into the world of sunshine, kittens, and My Little Pony." - This will make me chuckle all night. Damn you for mentioning My Little Pony in a book review before me!

What an intense and despairing story, especially Irina's part. Aleksandr's story isn't so unusual or nearly as sad as Irina's. It sounds as if Jennifer Dubois' writing is compelling and intensely emotional based on your visceral reaction. This both attracts me to the book and makes me a little afrad of it! lol I totlly understand your need to see something cute, cuddly and full of happiness and life after reading this book...and kittens are precious and adorable!

Ultimately, though, I'm intrigued by this book and want to see my own reaction to it. I think, based on your candid and terrific review, I would read it while also reading an upbeat, happier book in the hopes of off-setting some of the pain and grimness of "...Lost Causes".

Thank you for hosting a giveaway of this book.
Aimala127(at)gmail(dot)com

I used to love My Little Pony.

Sounds like just too depressing a read for me. Beautiful, maybe, but just not one I can bring myself to pick up.

The Huntington's thing is just fascinating as a plot item. I'm thinking Thirteen from House. Looks like it will be super sad though, like you said!

I know I need to be in a particular frame of mind in order to enjoy a book like this, so I understand where you're coming from.

I know I need to be in a particular frame of mind in order to enjoy a book like this, so I understand where you're coming from.