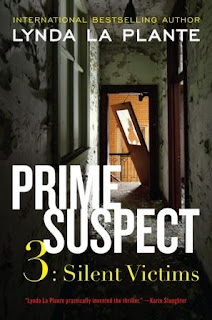 Chief Detective Inspector Jane Tennison has moved up the ranks, fighting every step of the way to break through the station house's glass ceiling.  Now, on her first day as the head of the Vice Squad, a case comes in that threatens to destroy everything she has worked for.

As Vera Reynolds, drag queen and night club star, swayed onstage singing "Falling in Love Again," a sixteen-year-old rent boy lay in the older man's apartment, engulfed in flames.  When Tennison's investigation reveals an influential public figure as her prime suspect, a man with connections to politicians, judges, and Scotland Yard, she's given a very clear message about the direction some very important people would like her investigation to take.  Suddenly, in a case defined by murky details, one fact becomes indisputably clear - that for Tennison, going after the truth will mean risking her happiness, her career, and even her life.

Every good journey must end.  I'm still not sure why, but that's what I've been told my entire life.  So needless to say, my time with Jane Tennison has sadly come to an end.  I'm still not sure why only three books were written or why the American version of the show had to come to a swift end.  Tennison is one of those characters that deserves to live a long and healthy life, one where she always comes up on top despite those rooting for her failure.

With Silent Victims, Lynda La Plante moves Jane from homicide to head the Vice Squad.  She knows she is going into the job with something to prove and she is bound and determined to do so.  When her investigation into the death of the 16 year old rent boy leads into murky waters, Jane is warned to keep a narrow focus.  It's only as she digs deeper into the lives of those who surrounded the young man does Jane begin to realize that their is something much bigger going on.  Why was an investigation into public figures and male prostitutes buried before she got to the department?  Why is a man who runs a teen shelter supposed to be so hands off?  Who is keeping secrets they would rather have stay buried?  It's by asking those questions that Jane will either destroy her career or finally prove that she deserves to be where she is at, maybe even something a little higher.

What I adored about Jane is this final installment is that she finally decides to play the game by the rules the "boys" established years before.  She gets down on there level and comes out on top.  She shows that she is not someone to be trifled with and isn't above playing dirty to get what she wants.  I love her. I want to go out and get drunk with her.  She is truly a character that will stay in my head for a very long time.

I will admit to having a few trepidations about the storyline itself though.  I'm always a little leery when authors start diving into the gay community, presumably one that they don't know much about.  Now granted, this is a side of the community I'm not all that familiar with either.  I know a few drag queens, but that's about the extent of it.  I will say the author played up to a few stereotypes, but I don't think it was done in any way that didn't push the plot along.  She did include a gay officer, and I'm not sure if this was meant to dampen the stereotypes down a bit, but he was a nice addition to the book.  He didn't get a lot of page time, but it did allow me to not see any bigotry behind the other characters.

Now I know this will be my last new foray into the field with Jane, but I'm looking forward to the day when I'm ready to pick up all three books and give her a chance to amaze me once again.

I would like to thank Trish of TLC Book Tours for the opportunity to read and review this book.  Please visit the tour page to read other review on this and the previous two books.
Posted by Ryan at 12:17 AM

It sounds like you want more of these characters. That speaks volumes to me.

I like the idea that Jane decides to play by the rules and still beats the boys at their own game. That's one smart lady!

Glad you enjoyed this series Ryan. Thanks for being part of the tour.