A Lesson In Secrets by Jacqueline Winspear 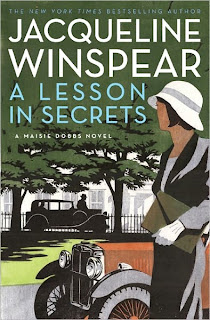 In the summer of 1932, Maisie Dobbs’ career goes in an exciting new direction when she accepts an undercover assignment directed by Scotland Yard’s Special Branch and the Secret Service. Posing as a junior lecturer, she is sent to a private college in Cambridge to monitor any activities “not in the interests of His Majesty’s Government.”

When the college’s controversial pacifist founder and principal, Greville Liddicote, is murdered, Maisie is directed to stand back as Detective Chief Superintendent Robert MacFarlane and Detective Chief Inspector Stratton spearhead the investigation. She soon discovers, however, that the circumstances of Liddicote’s death appear inextricably linked to the suspicious comings and goings of faculty and students under her surveillance.

To unravel this web, Maisie must overcome a reluctant Secret Service, discover shameful hidden truths about Britain’s conduct during the war, and face off against the rising powers of the Nationalsozialistische Deutsche Arbeiterpartei—the Nazi Party—in Britain.

Well here I am again, writing a review for a Maisie Dobbs book, the fourth one in about a year.  And once again, I'm not going to be able to say anything negative about the book.  So needless to say, this review is not going to be overly long.  I wish I had paragraphs and paragraphs to say.  I wish I was able to expound on the cleverness and themes being explored in this book, as well as the others.  The problem with that is I've never been one to read too much into any book.  I tend to read in order to enjoy the story, not to over think the issues the author is exploring.  I know that may seem a bit shallow to some, but I learned a long time ago that if I think about what I'm reading too much, I no longer enjoy the book for the story alone.

A Lesson in Secrets, moves Maisie into a new field of work.  Because of her previous work with various government agencies, Maisie is now finding herself working for the more clandestine branches.  She is approached to go undercover at a college and find the sources of the rumors spreading around like wildfire. She needs to figure out what elements in the college threaten the stability of her country.  She quickly enmeshes herself with her students and the other professors.  When the college president is found with a broken neck, Maisie takes it upon herself to find the killer and determine if the death has anything to do wither her assignment.

I loved the idea of Maisie branching out into a field of work that seems like a natural progression of her abilities and training.  Her old mentor, Maurice, was actively involved in clandestine work and it is only just that Maisie follows in her teacher's footprints.  I'm intrigued to see where the author takes this idea as the lead up to World War II gets even closer.

I would like to thank Trish of TLC Book Tours for the wonderful opportunity to read and review these books.  Please visit the tour page to read reviews of this book and the rest of the books in the series since the entire month of March is being devoted to them.
Posted by Ryan at 12:31 PM

this sounds just fab... I had never even heard of the writer but it sounds right up my street. Thank you for sharing,
Hannah

I think most people read to enjoy the story. I often wonder if authors really intend their books to have all the themes and symbolism English teachers credit them with. This series sounds so good.

You have sold this series to me!! I have book one and want to get to it this summer for sure. I bet I will gobble them up just like you did!

I love it when I see a review that honestly has nothing negative to say. :)

Glad you're continuing to enjoy this series. Thanks for being on the tour Ryan!