The State Vs. Elinor Norton by Mary Roberts Rinehart 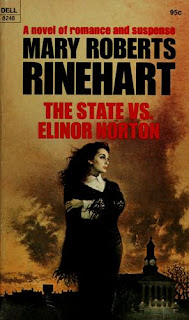 ELINOR:
She was beautiful and tormented - a woman who had married one man and loved another.

LLOYD:
He was a man who had everything that money could buy.  But all his wealth could not grant him what he most wanted - the love of his wife.

BLAIR:
He had power over women, especially married women.  Elinor Norton was no exception.  She loved him, there was not doubt of that - but did she love him well enough to murder?

All Caroline Somers wanted for her only daughter, Elinor, was a proper marriage.  Money wasn't the issue, they had plenty of their own, but marrying into the right social class was what mattered.  Caroline was dogmatic on the issue, drilling proper form and etiquette into Elinor from day one.  So it was no surprise to anyone when Elinor was set to marry Lloyd Norton.  He was from the right sort of family and had the money to spare.  Elinor was never in love with him, but she agreed to the marriage to make her mother happy.  She had already met and fallen in love a young man from the wrong side of the tracks, but that was quickly swept away.

Once Lloyd and Elinor are married, life seems to have fallen into a stable, if boring existence.  Elinor is never really all that happy, but has steeled herself for her role in life.  When Blair Leighton enters the picture, things start to change.  She falls in love with him, despite every signal that she shouldn't.  When the two men come back from the war, things start to change a little too rapidly for everyone involved.  Lloyd had been changed by the war, he was moody and would become violent with his wife.  He suspected her of cheating, not knowing that despite her feelings for Blair, she had never acted on them.  He wasn't even aware Blair existed, until a chance encounter changes all their lives forever.

The two men decided to go into business and invest in a cattle ranch in Montana, which is a far cry from New York City.  The three of them set up home and everything seems to be going okay at first.  Then Lloyd starts to change, suspect things.  His moods grow even more dangerous and violent, it doesn't take very long for Elinor to start having feelings for Blair again.  Now a man like Blair, a womanizer to the core, can't help but feed of that kind of attention.  Though nothing happens between them, the tension fills the ranch house.

By the end of the book, both men are dead and Elinor is on trial for killing one of them.  She refuses to mount a defense and seems to willingly go to her own death.  All of the story is told in flashbacks from the perspective of Carroll, Elinor's childhood friend who has always carried a torch for her.  Carroll has been around the periphery of everything that has been going on, but didn't realize just how bad the situation had gotten.  Carroll is the one good man in Elinor's life, the only one who never seems to let her down.  He is obviously in love with her, and at times you get the impression the feelings may have been returned.

What I loved about this book is how Mary Roberts Rinehart tells it.  The story starts with Elinor going on trial for murder, so you know right away that she killed someone.  You don't know which man it is or how it happened.  As the story progresses and Carroll allows the reader into the back story, I started to have my own conclusions about what was going on and who it was Elinor killed.  It's only toward the very end that I realized I was completely wrong.  Rinehart didn't mislead me, I just followed the trail in the wrong direction.  I have to say, I prefer the ending Rinehart came up with.

I know I've said it before, but I'm in love with everything Rinehart does.  With each book, I feel as if I've getting to appreciate her storytelling a bit more.  I loved the way this one shifted back and forth between the past and the present.  I loved the idea of the narrator being someone who was around, but not directly involved in the pertinent action.  I loved the way the story played around with societal norms and what was acceptable moral behavior,  I loved the interaction between the three main characters, especially towards the end when all the relationships were fraying around the edges, the tension was perfectly executed.  But most of all, I love the way Rinehart is able to create and maintain a fine balance between an oppressive atmosphere, compelling characters, and narrative voice that is all her own.

I would like to try this one although it remains me of one Agatha Christie's novel - the heroine had the same name (Elinor) and she was also going on trial for murder...but she wasn't married. Not yet.

I love books that lead me astray like that! It sounds like this book has a great ending.

Once again, I'm blown away by your enthusiasm for this author. Thanks to you reviewing her books I've added several to my Kindle!! I love it when someone reads a book that hasn't seen the light of day in a long while...thank you!

I have this one! Just picked it up in my Red Cross Book Sale book-binge. I didn't read the review too closely--but will come back and compare once I read it!