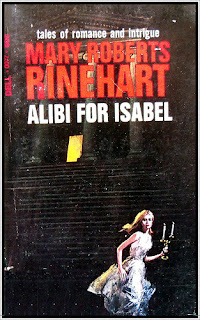 There are two things I love in life, well more than that but only two that have anything to do with what I'm doing here, short stories and Mary Roberts Rinehart.  Now granted, when I got a hold of this book, I did not know that it was a collection of 9 short stories.  I thought I would be in store for another great mystery set around a wonderful heroine and an intriguing storyline.  What I ended up with was so much better.

Each one of the stories, mystery or not, showcases what Mary Roberts Rinehart was so good at.  In a rather short span of time, each story is around 13-15 pages, she was able to capture not only the characters but the atmosphere as well.  Each character, regardless of their circumstances, are fully fleshed out and capable of starring in their own full length novel.

The "feel" of the stories though is where, as usual, Rinehart shines for me.  She is capable of bottling the tension in the air in a way that I'm not sure most other authors could.  Every emotion and reaction are palpable as each page is turned.  The fear and desperation these characters feel, at times, chocked the air I was breathing.  It made me lose my sense of time and place as I got lost in their lives.

Since they aren't all mysteries, I would think this would be a good introduction to her writing style for those who have not read her before.  I think it would give somebody new to Rinehart a good sense of what she was capable of, without becoming too invested in a story that you may not like as much.  For anyone who hasn't been swayed by my previous reviews, I hope you will give this one a try.

You make me feel like I NEED to try this author. Your enthusiasm for her work is contagious!

Ryan: This is one I haven't read. But will add to my MRR list.

Have you read THE ALBUM? I think that was my last MRR. Fabulous!

I have added a lot of free Kindle books from this author. This sounds like a great way to be introduced to her writing.

This is another one that I picked up in my Red Cross Book Sale binge. I grabbed up a whole bunch of MRR books. Gotta get through my challenge books for this year before I can start on them, though.