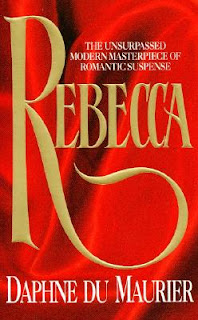 "Last night I dreamt I went to Manderley Again."

So the second Mrs. Maxim de Winter remembered the chilling events that led her down the turning drive past the beeches, white and naked, to the isolated gray stone manse of the windswept Cornish coast.  With a husband she barely knew, the young bride arrived at this immense estate, only to be inexorably drawn into the life of the first Mrs. de Winter, the beautiful Rebecca, dead but never forgotten... her suite of rooms never touched, her clothes ready to be worn, her servant - the sinister Mrs. Danvers - still loyal.  And as an eerie presentiment of evil tightened around her heart, the second Mrs. de Winter began her search for the real fate of Rebecca... for the secrets of Manderley.

I'm not even going to try to go into an in depth review on this one.  I think almost everything that can be said about this one, has already been said.  I don't think I will have a new take on it or any breakthrough in understanding of the themes.  What I can say, is I loved it.  I'm not really sure why it took me so long to read it.

Daphne Du Maurier wrote this with an almost decadent lushness that I found overly appealing.  I got lost in her descriptions of the grounds of Manderley.  I wanted to walk those paths through the woods to the beach.  I wanted to wander the halls and peer into rooms, long abandoned after Rebecca's death.  I wanted to touch, taste, and smell everything our heroine was experiencing.  If it had been possible, I would have lost myself and not been able to make it back.  I would have holed up in a room somewhere and forgot the rest of the world.  If there is only one aspect of a Gothic novel that I love, it's that decadence in the writing.

The other aspect of this book I found utterly fascinating were the female characters.  I love the idea of our heroine never having a first name.  It makes the recounting of the past that much more personal.  It gives the impression that as a reader, we are already friends with her.  It was as if we were together, sitting in a library much like the one in Manderley, and that she is telling her tale during a lazy afternoon.  It allowed me as a reader to get even more involved with the action and the characters.  It was in intoxicating feeling at times, one that I never wanted to let go of.

I guess that leads us to Mrs. Danvers.  I'm not even sure where to being on my feelings towards her.  Before I had actually read the book, the one thing I've heard from everyone is how evil and nasty this woman is.  When I began the book, I was waiting to meet her, because I wanted to see how bad ass she really was.  At first, I was a little disappointed.  For a while, I thought she was a bitch, but not much more than that.  She just seemed to have a massive chip on her shoulder, one that would never go away.  Needless to say, I was feeling a little let down.  I was wanting the devil incarnate and instead I was getting Gargamel.  Thankfully, Mrs. Danvers redeemed herself.  She finally became the manipulative hag I had been hearing so much about.  What she tried to do to the new Mrs. Danvers will go down in literary history as one of the most evil examples of mental abuse.  She was brilliant at it, and I love her for it.  This book was worth reading, just for Mrs. Danvers.

I haven't watched the Hitchcock adaptation of this yet, but if everything I've heard about it is true, I can't wait.  Either way, I think this will be a book I reread often.  It will be one of those that I discover new things in every time, and I can't wait.

Ooh, I love Rebecca! I'm with you on the descriptions of the grounds - DuMaurier gave some of the plants almost human qualities but when she describes Mrs. D - it's with deathlike features. Loved it! One scene I found really ironic is when Mrs. D is trying to convince the new Mrs. DW to jump out the winter and then the alarm sounds she tells her to watch her fingers as she is closing the window. You have to watch Hitchcock's version of the movie. Fantastic. Gothic galore! Oh, did I mention that I loved it? ;)

I have been borrowing books for my mum and Rebecca was one of those. I can't believe I got my mum to read it before I have! Cos i want to

I wrote an essay on REBECCA for the book 100 MUST READ THRILLERS -- truly an amazing book that set the foundation for the future of romantic suspense. I agree about Mrs. Danvers :)

I always avoided this book because I thought it was romance. It was only recently that I came to realize Hitchcock made a movie from it. You've made the book sound very appealing.

I put off reading this book too but once I read it, I loved it! That was a few years back and I still have yet to see the film adaption.

I loved this too and hands down, I didn't read it at first because of the cover.

I have had a copy of this one for what seems like forever. Glad to read that you loved it!

Dame Judith Anderson does Danvers to perfection in the Hitchcock version. You've got a treat in store!

I loved this book too! I will re-read it one day. You have me curious about the Hitchcock adaptation. I did not realize there was one. Going to look for it, and watch it hopefully this Fall.

You haven't seen the movie? D:

I do like the movie, but I've never been able to get through the book. I don't know why, it seems like something that would be a sure bet for me.

I absolutely love Rebecca - it's probably my all-time favorite. I'm glad you enjoyed it so much!
A lot of people mistake it for a romance novel (probably because of that misleading red cover, haha), but it's so much more. Mrs. Danvers is so evil and scary. Gives me the chills.
Great review! It really put me in the mood to reread the book, haha.

Do watch the movie but don't read its sequel. :)

I watched the movie a hundred times before I finally picked up the book. I love them both equally now. It's a wonderful story!

Rebecca is one of my favourite books. Do think about picking up some of her other, less well known, books, she really was an amazing writer.

I loved this! I recently read My Cousin Rachel which is almost as good and I have Jamaica Inn set aside for the readathon

I tried to get my bookclub to read it because I still have not. It was a no go. I am reading The Lantern right now which is compared to Rebecca. I think I'd rather just read Rebecca. The Lantern isn't turning out to be that great. I'm glad you finally read this one and loved it.

Love the book and loved the Hitchcock film with Joan Fontaine (love her!). One of my favorite movies. You really must go rent it, borrow it, buy it...now! LOL!

I need to reread Rebecca

Oh DEFINITELY watch Hitchcock's version of this book. It's one of those rare occurrences where the film is just as good as the book.

A terrific movie for sure. I loved the book too. Thanks for another great review, Ryan. :)

Judith Anderson is superb. But her housekeeper became a parody in the hands of other actresses whenever a nasty housekeeper was called for.

I read that Lawrence Olivier wanted Vivien Leigh for the role of the unnamed heroine and when he didn't get his way, made life miserable for Joan Fontaine on the set. I'm hoping this wasn't true.