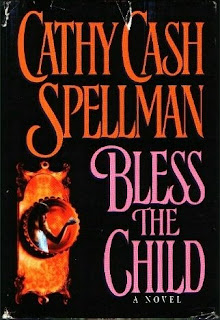 What if your drug-addicted daughter left a newborn baby on your doorstep and disappeared?  What if she came back three years later and took the child you love into a satanic cult?  And, what if that child turned out to be mankind's last hope in the war between good and evil?
Would you risk your soul to save her?

Maggie O'Connor is about to answer these questions...maybe with her life.  A vibrant, attractive, recently widowed partner in a Manhattan antiquities shop, she is too young to be a grandmother.  Yet the love and the bond between her and her little granddaughter Cody is deep and rare enough to make her fight - not just for custody, but for the child's life itself.

The law won't back her up.  But the exorcist priest believes.  And the rabbi who practices Kabbalah knows too much not to believe.  And ancient, raging memories of an Egyptian prophecy are rising within her own terrifying dreams.

When I saw this book at the Friends of the Library Bookstore, sometime last year, I knew the title was familiar but couldn't remember why.  I went ahead and bought the hardcover, for $1, and took it home.  It's been sitting on my shelves ever since, but since this was Halloween month, I wanted to get it read.  Once I started reading it, I realized why it was so familiar.  This was the book the Kim Basinger movies, of the same name, was based off of.  Luckily for me, the book was way better than the movie, which was mediocre at best.

I'm going to be honest with you right up front, this won't be a very detailed review, I have been trying to figure out what I can say about the book without spoiling the surprises, and I've decided that's not very much.  If you have seen the movie, which for your sake I hope you haven't, you'll know the basic plot points already.  If not, I apologize now for what will probably being a boring review.

What drove this book for me were the characters.  Lead by the strong willed, Maggie, the entire cast seems to be ready made for the big screen.  There is the fiercely loyal cop who not only falls for Maggie, but is willing to do whatever it takes to protect her and Cody.  There is the priest who was sent into exile for his views, he too falls for Maggie, but it's the memories of the past and a crisis of faith that help him put that into context.  The white witch, bookstore owner, proves to not only be a powerful ally for Maggie, but a good friend as well.  Maggie also has a martial arts master, her friend and business partner, and her housekeeper that will do what needs to be done to rescue Cody.  I'm not even getting to the FBI agent, the rabbi, or the various international agents that all, in some way, help Maggie along the way.  It's a large cast of characters, not one of them was weakly drawn.

What I was really impressed with is that Cathy Cash Spellman manages to mix in Christianity, Satanism, Egyptian Mythology, Kabbalah, and a few other disciplines and make it work.  Nothing feels forced or out of place.  She was able to create a seamless narrative that allowed me to believe in the Isis Messenger and the amulets.  I actually was hoping they were true, but alas they weren't.

I'm not sure what else she has written but I'm curious enough about her writing style to do a little more digging into her other books.

It sounds like there's a lot going on in that book. I'm glad to see it worked.

I've never heard of the book or the movie but I like the mixture of Satanism and Egyptian mythology. Promises to be disturbing.

I saw the movie awhile ago, but this one does sound like a good book! You're right...it is probably better than the movie.

Thanks for reminding me about this one.

Love a good suspense, especially one that's character driven. Lucky for me, I haven't seen the movie :)

I love it when a book surprises you and turns out to be good. Those library sales are always fun and you never know what gem is hidden in the stacks!!

Oh wow. This sounds really good. What movie was it with Kim? I don't think I've seen it though. :) Thank you!

I remember seeing this movie years ago and actually thinking it might have been better if they cast almost any other actress in Maggie's role! ;) I never knew it was based off a book. Might have to go check it out!